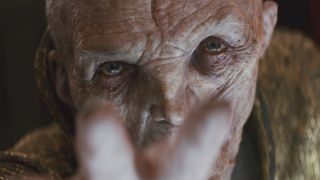 The Taiwanese subtitles for Star Wars: The Last Jedi may hold the key to whom Luke and Snoke are really talking to in that new trailer, if one fan's interpretation is correct. And yes, you're absolutely right - it is pretty much just like when international posters for The Last Jedi seemed to reveal whether the word "Jedi" was singular or plural.

Basically what this boils down to is that English doesn't use gendered nouns as much as others. When we say "you," we rely on context to know if we're addressing one person, several people of the same gender, or several people of mixed gender. Taiwan, however, would use the character "妳" if someone were written speaking specifically to a woman. Meanwhile, the character seen used when Snoke says his second line and Luke issues his warning ("你") can be read as masculine or neutral. The more you know.

If SleepingAran's interpretation is correct, this would mean that when Snoke opens the trailer with "When I found you, I saw raw, untamed power," he's talking to a woman (and therefore probably Rey), and when he says "Fulfill your destiny," he's speaking to a man. This would also mean that when Luke says, "This is not going to go the way you think," the person he's speaking to is male.

Now, I advise you take all of this with a great big heap o' salt. For one, translation is not a simple word-for-word swap. Sometimes nuance and alternate meanings get lost or gained moving from one language to another. Remember those international posters I mentioned earlier? Those indicated "Jedi" was plural, but director Rian Johnson has said it's singular.

So either translations can be wrong, Johnson is lying, or Disney is manipulating the whole thing from the shadows to keep everyone guessing. Take your pick.