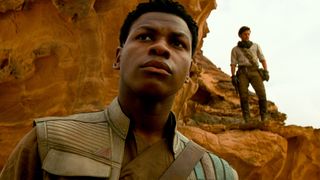 During a recent Q&A screening, J.J. Abrams offered his interpretation on the scene that had fans guessing and guessing well into the weekend. He said Finn wanted to tell Rey that he was Force-sensitive, but left it open-ended so it "could mean different things to different people." Watch Abrams speaking below.

It has come to my attention that I may have not worded my post as accurately as I could’ve. JJ said it meant to him that he wanted to tell Rey he was force sensitive, but purposely left it open ended which is even worse. If he’s the director and that’s how he feels, why not do it https://t.co/bc6ONdSB64December 22, 2019

So… that’s it. Big mystery solved? Possibly. It still doesn’t quite make sense that Finn would choose then and there to blurt out his big Force secret, but then be all secretive about it in front of Poe and the others later. Yet, it’s still an almost-instant answer from The Rise of Skywalker director, which is perhaps more than we could have hoped for. Just maybe don’t expect it to turn up in any deleted scenes or Quicksand Cuts.

The man who delivered the line, John Boyega, has also taken to Twitter to dispel one fan theory surrounding the moment. He revealed that Finn was never going to tell Rey he loved her.

Now that has been cleared up, we can get on to the important stuff – like when are we getting a Babu Frik spin-off?