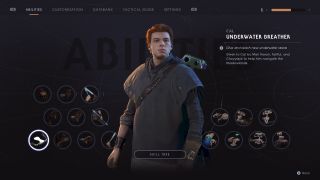 What Star Wars Jedi Fallen Order Force power, ability and upgrade you chose as you level up and progress can greatly affect how the game plays for you. Combat can become more defensive or aggressive, new areas can open up, and your survivability  can massively increase.

Things like Force Push, wall run, double jump will change the map as you explore while there are gear upgrade for both Cal and BD-1 that can also radically change the game and your options. Some you'll find naturally as you play, with hte game dishing them out at key points but others are off the beaten track and require a little exploration to locate. This guide to all the Star Wars Jedi Fallen Order Force power, ability and upgrades you can find should help you get what you need and avoid missing out.

You can’t leave Bogano without grabbing this, and you’ll find it in the Subterranean Refuge area via a handprint in a narrow room which will jog Cal’s memory.

Once you get the choice to head to Zeffo or Dathomir, pick Dathomir, the scary red homeworld of Darth Maul to unlock a second blade for your lightsaber early. Once you’re there progress through Brother’s Bastion, meet the Nightsister and you’ll eventually be led to a platform with a cloaked mumbling man. Turn around and drop down to find a path to a customization bench and this early upgrade.

Alternatively, you can grab this upgrade later in the story if you return to Bogano with Force Push and BD-1’s Scomp Link and explore the Abandoned Workshop to completion. If not, you’ll get it on Kashyyyk right before a big boss battle. No spoilers here!

On Zeffo you’ll head to the first tomb, the Tomb of Eilram, where you’ll find a glowing blue door in an early area. Click the right stick to jog Cal’s memory and unlock this force ability. This ability is unmissable, so just keep playing through the campaign.

With Force Push in tow, head back to the Weathered Monument area which is covered in troopers. There should be a door highlighted on your minimap which you can open with Force Push. Head up in a circular motion through this area and you’ll find a bench where you can upgrade BD-1 so that it can slice, or hack, scomp doors and chests.

From the starting point of Kashyyyk, you’ll hit a blockade with a broken terminal and the game will funnel you into a room with two ziplines. Interact with the bench in this room to pick up Overcharge, an unmissable ability that lets BD-1 interact with  terminals, switches, doors and ziplines.

In the Imperial Refinery on Kashyyk, you’ll free Wookie slaves and find yourself outside with a group of rebels. On the far edge of the platform you’ll see two vines that lead you around the other side where there’s a workbench you can use to get this missable ability.

Once you've freed the Wookiees on Kashyyyk, you’ll head back to Zeffo for the third and final tomb of doom! In the Tomb of Miktrull you’ll solve a few puzzles before being forced to engage your Force Pull ability to save Cal’s lightsaber from falling. This will jog Cal’s memory and unlock the ability, which you can’t miss.

With the Overcharge ability you can now get past the ruined terminal and cross down into the Imperial Dig Site on Zeffo where you’ll encounter a boss and some story beats. Keep progressing through this area until you reach a room with two security droids brawling. Beat them up (or turn them against each other if you have the Slice Security Droid ability) and use the bench they’re blocking to unlock this ability.

On the way back from the final Zeffo tomb when the Second Sister is taunting you, you’ll be forced to wall run your way back to the Mantis along some red structures in the Imperial Headquarters. After swinging from two vines and clearing a platform with stormtroopers, use the nearby bench to unlock a BD-1 upgrade that will let you slice Probe Droids.

When you return to Kashyyyk for the second visit you’ll progress to a watery area where Mari Kosan, Tarfful and Choyyssyk will stop Cal and give him an underwater rebreather to help him reach the Shadowlands. You need it to progress so don’t worry about missing it.

Still on your second visit to Kashyyyk, keep playing until you start helping out a huge dinosaur/bird creature who will lead you along a path to an ancient tree. During an area in which you bounce across green plants, the movement will jog Cal’s memory and he’ll learn a double jump called Jedi Leap.

Very late in the game on Dathomir you’ll fight a giant bat beast in a cave. After the first phase of the battle you’ll need to nick these unmissable climbing claws from a fallen Nightbrother to scale the wall out of its den.

In the final act of Fallen Order Cal will wreck his trusty blade, meaning you have to take a detour to Ilum to fix it. Navigate through the icy caves to find a bench where you can get a new kyber crystal, pick your saber colour and unlock a new slit saber to use in combat.