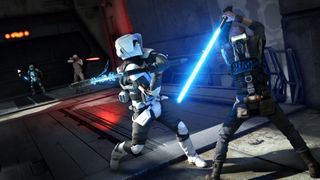 There's no shame in looking for Star Wars Jedi: Fallen Order cheats. Whether that's a trainer, console commands or a cheat engine. If you just want to blast through the game or have some overpowered fun then there are options.

Unfortunately, those options are only possible on PC as there's no way to get under the hood and tinker with the game on PS4 and XBox. However, if you're playing using a desktop or laptop then there are ways to give yourself access to options such as unlimited health or full skill points. If that sounds like something you want to do then read on and we'll show you what options are available to give yourself a, let's face it, illicit boost.

Sadly, there aren't any official Star Wars Jedi: Fallen Order cheats available via PC console commands, so you can't just bring up that little text box and start tweaking variables within the game. There is an unofficial method to add some of this functionality, but before you try this or any other methods listed in the guide we must stress that downloading and running any third-party software is completely at your own risk, so make sure you apply due diligence and confirm your PC has adequate protection before going ahead with installing any cheat programs. You should also create a back up of all your important game saves before you proceed, so you're covered if you need to restore them later.

To add console commands to Star Wars Jedi: Fallen Order, you need to install the Universal Unreal Engine 4 Console Unlocker and follow the instructions listed over at Nexus Mods. It should be noted that as these are Unreal Engine 4 console commands, you'll only be able to affect visual settings such as FOV, FPS limit, motion blur etc.

Another method available is Cheat Engine, which is an open source program that can be used to modify single player games by using an extensive set of tools. After you've installed and got it up and running, you can then import Cheat Engine Tables into it – these are user-created and built to deliver a selection of cheats directly into your chosen game. The Cheat Engine Table listed on this forum unlocks a number of options including increasing your health, stamina, Force, and stims.

The last option for Star Wars Jedi: Fallen Order cheats we'll look at here is downloading and installing the WeMod Trainer – there are different download options available for the Steam and Origin versions of the game so make sure you pick the right one. WeMod presents a tidier interface than Cheat Engine which may you may find easier to use, and it offers unlimited health, shield, and Force, as well as letting you set the level of your skill points and Exp.