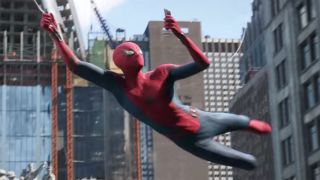 So, drum roll please: The Spider-Man: Far From Home runtime is 129 mins. That’s according to the British Board of Film Classification (H/T CBR). The length of a smidgen over 2 hours means it’s only longer than Doctor Strange (115 mins), Ant-Man and the Wasp (118 mins), and Captain Marvel (123 mins). There are seven longer Phase 3 movies that beat it out.

The Spider-Man: Far From Home runtime is actually on the briefer end of the scale, too, when stacked up against some of the other webhead’s flicks over the years. Of course, a movie’s length is not a mark of quality, but it’s worth noting it’s the shortest Spider-Man movie in 15 years.

Of course, the 129 mins also includes the bombastic Marvel Studios intro, plus any and all credits (and attached scenes). You’re probably realistically looking at a first-scene-to-last-scene Spider-Man: Far From Home runtime of two hours when you cut out everything that isn’t the movie itself.

Interestingly enough, the Spider-Man: Far From Home runtime also confirms a long-held theory that the ‘I love you 3000’ line from Morgana Stark in Endgame was a reference to the combined runtime of all 23 current MCU movies. I’ve run the numbers and, wouldn’t you just believe it, it’s 3000 exactly. Brilliant.

So, Marvel is even slipping Easter eggs into something as seemingly arbitrary as the Spider-Man: Far From Home runtime now. Is there anything Kevin Feige can’t do?

Marvel's longest movie is about to get even longer. Here's what's included in the Avengers: Endgame re-release