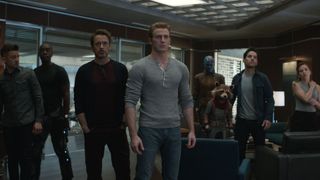 The Avengers: Endgame re-release, with brand-new footage, is nearly upon us. Heading into US cinemas on Friday, June 28, the push towards knocking Avatar off its lofty billion-dollar perch will include some extra treats for die-hard MCU fans. Not only is there going to be an actual Avengers: Endgame post-credits scene this time around but, apparently, there’s going to be a Stan Lee tribute too.

As reported by MCU Cosmic, the new batch of footage will include one of the many, many Avengers: Endgame deleted scenes left on the cutting room floor. Details are a little thin on the ground, but it’ll arrive after the credits and feature the Hulk.

That’s interesting for a couple of reasons, namely that Bruce Banner was left badly injured after the events of Endgame, and his future is very much up in the air when it comes to Marvel Phase 4. Here’s hoping that clues us in – and maybe sets up something for his immediate future.

Elsewhere, there surely won’t be a dry eye in the house as we’re getting a Stan Lee tribute. Captain Marvel included a bombastic intro featuring every Stan Lee cameo in the MCU, though this one could be a little more sombre and reflective in tone.

Finally, there’s even a nudge from Marvel Studios to get you to see another new Marvel movie. That’s right, there’s also going to be a Spider-Man: Far From Home teaser bolted on to the movie’s three-hour runtime. Make sure you’ve gone to the bathroom long before then.

So, with just tens of millions of dollars in it (chump change to the likes of Kevin Feige, but who’s counting?), Avengers: Endgame has Avatar in its sights on the way to potentially becoming the biggest box-office hit of all time. Will Endgame do it? That’s entirely up to you.

Watch our Release Radar video below to discover what's going on in games and entertainment this week.