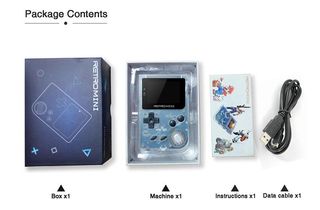 Earlier this month, rapper DeAndre Cortez Way - aka Soulja Boy, of 'Crank That' fame - started selling plug-n-play-style emulation game consoles via his merch store, SouljaWatch. Initially, Way was only selling two systems: the SouljaGame Console and the SouljaGame Handheld. Ever the entrepreneur, Way has since added two more systems to this storied lineup: the Retro SouljaBoy Mini handheld and the SouljaGame Fuze console, available for $70 and $400 respectively - ostensibly discounted from their normal prices of $74 and $640.

I couldn't make this up if I tried.

Like his first two systems, both the Retro SouljaBoy Mini and the SouljaGame Fuze can be found much cheaper at other retailers. You can get the former for $50 on Amazon, and the latter is available via AliExpress for $320. That being said, you should not get them from anywhere, for any price, ever. Don't do it.

The Retro SouljaBoy Mini is a pretty standard box of ROMs - 508 ROMs, to be exact, at least according to SouljaWatch. The Amazon listing for the system says it has 548 ROMs though, with 40 on the actual console and 508 more on a TF card, so who can say? Speaking of which: do you want to know what those ROMs are? Well, so would I, but Way is keeping that particular secret under lock and key. The Amazon listing doesn't say anything about the games either, but it does make the handheld sound like a proper fire hazard. Here's a juicy little excerpt for you:

1. Do not short circuit battery contacts

2. Do not dispose of batteries in fire

3. Remove the batteries from the unit if sit will not be used for an extended period of the time.

Interestingly, while the Retro SouljaBoy Mini is made by Anbernic - the same company behind the first two SouljaBoy systems - the SouljaGame Fuze is actually the Fuze Tomahawk F1 from Chinese company Fuze Entertainment. As ZhugeEX reported in 2016, it was pitched as a compromise between the PS4 and Xbox One geared toward the largely untapped Chinese gamer demographic. It looks like a tiny PS4 and its controller is a dead ringer for the Xbox One gamepad, but it's said to run using an Android operating system.

Fuze Entertainment talked up the system's partners way back when - pointing to studios like Koei Tecmo, Arc System Works, and even Ubisoft - but it's unclear what games are actually available on the Fuze. Promotional art on AliExpress (and on SouljaWatch, which brazenly uses the same images as other stores, as it does for all its consoles) features games like cutesy 2D action game Rabi Ribi and arcade racer Blaze Rush - which, to be fair, have both received very positive reviews on Steam. However, I'm still not sure what's on the Fuze itself, and its tagline doesn't help: "The introduction of paragraph 76 games, starting 20 games shock." That could mean it comes with 20 games and you can download up to 56 more, but your guess is as good as mine.

Way also mentioned Fortnite Twitch star Ninja, who he described as "a good friend" who taught him about streaming and helped him get verified on Twitch. (Curiously, Way's Twitch channel has been deleted.) "It's gonna take a lot to hire Ninja to play for me," Way said. That, I agree with.

Oh, and we're not done. Earlier today, Way tweeted that "we are now passed two million dollars in sales," though he didn't specify where those sales came from. To top it all off, the prices of the original SouljaGame Handheld and SouljaGame Console have risen considerably. Like Way's newest consoles, they were 'on sale' from the second they went up on SouljaWatch, both discounted from their normal price of $200. Apparently, that sale has ended: the handheld now goes for $113.58 while the console costs $211.98.

I have no idea what Way expects to gain from all this. Money? Memes? So I say again: why was 2018 allowed to reach this point?

2018 is still a hellscape so here's something that made me smile: God of War director Cory Barlog ranks his favorite God of War games.