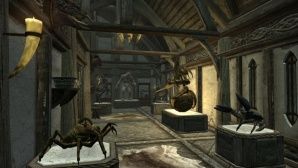 The Elder Scrolls V: Skyrim's latest DLC expansion Hearthfire has gone live on Steam, but things look no better for PlayStation 3 owners still waiting for it and Dawnguard. Hearthfire opened for sale on PC yesterday after a month of Xbox 360 exclusivity, and Bethesda vice president of public relations Pete Hines took to Twitter to communicate with perturbed PS3 players.

"I don't have any info on Hearthfire, Dawnguard, or DLC in general for PS3," Hines said. "We're still on it. Will share update when I have one." Sony is assisting Bethesda in getting the DLC up to snuff on its console, but Hines said ultimately the responsibility falls on the developer. "It's our problem, and it's on us to solve it."

Hines said both Dawnguard and Hearthfire have been stuck in limbo because of unsatisfactory performance when running on PS3. That particular version of the game has played host to a whole suite of undesirable console exclusives, with save glitches and steadily dropping framerates emerging after its November 2011 release.