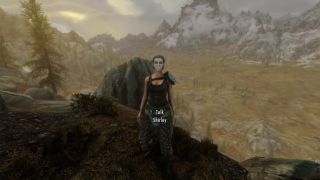 You know her, you love her, and now she can follow you in Skyrim. We knew Shirley Curry (aka Skyrim Grandma) was getting an NPC follower mod, but thanks to PC Gamer, we now know it's coming soon. One of the mod's developers (Reddit user Phantom_scribbler) has released a teaser trailer that states the mod will be available in Early 2020 (which is right now, so the clock's ticking). As GamesRadar+ previously reported in our Elder Scrolls 6 roundup, Curry will also be made into an NPC for the upcoming sequel. Her voice acting career is taking off, so who says you can't become something after you turn 30? Check out the teaser trailer for the Shirley Skyrim mod below.

It's so wholesome I want to die, as the appropriately titled 'Shirley' mod will drop Skyrim Grandma in the game as a follower with her own quests, interactions, and voice lines, recorded in Curry's dulcet tones. Hopefully she'll offer to sing me a lullaby or read me a bedtime story so I can get peak Grandma in my Skyrim gameplay. As PC Gamer pointed out, Curry will be a classic barbarian, donning light armor and using two-handed weapons and archery - a total badass.

In the trailer's description on YouTube, user Dan Kemp answered some important questions regarding the upcoming Shirley mod. According to him, it should be dropping sometime this month, and will be available for both Skyrim classic and Skryim Special Edition on PC - and they're even working towards an Xbox release (a PS4 release is "impossible"). She may also be able to read books that you give her, but likely from a specific selection.

Curry rose to Internet fame back in 2015 after she began posting videos of herself playing Skyrim on her YouTube channel. She quickly became known as Skyrim Grandma, providing us with some ASMR gameplay to soothe our tortured souls. It's only fitting that she gets immortalized in some Elder Scrolls gameplay, but it's an extra special treat that she'll be in two separate titles.

If Skyrim Grandma has you feeling hopeful about the new year, the best upcoming games of 2020 will only add to that.