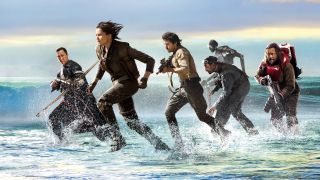 Some directors are power-hungry maniacs who relish having complete control over every aspect of a film production, and others are more like Star Wars: Rogue One director Gareth Edwards, who was willing to take inspiration for his $200 million blockbuster from an extremely unlikely source: a misspelled name coffee cup.

Speaking at the SXSW Film Festival in Austin, Texas, Edwards revealed that the planet of Scarif - you remember, the beach-themed planet that serves as the setting for Rogue One’s climactic battle - got its name from an incident in which someone screwed up his name during a coffee order. "I must have said, 'It's Gareth,' and they wrote 'Scarif,'" he explained to the laughing crowd (via THR). Must be pretty cool to be that particular barista and know you’re responsible for a contribution to the Star Wars universe, eh? I'd be bragging to my friends about that for the rest of my life.

Side note: if you're interested in learning about the names of Star Wars planets, be sure to check out StarWars.com. They have more backstory there than anywhere else in this or any other galaxy.