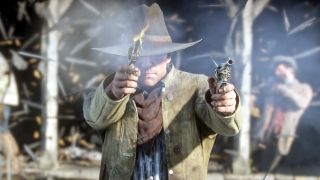 Feels like ancient history now, but the game was originally set to arrive in fall 2017. So we'll end up waiting a full year longer to play Red Dead Redemption 2 than Rockstar initially projected! And there's still no mention of a potential PC version, unfortunately.

"We apologize to everyone disappointed by this delay," Rockstar wrote in a post on its official site. "While we had hoped to have the game out sooner, we require a little extra time for polish. We sincerely thank you for your patience and hope that when you get to play the game, you will agree the wait will have been worth it."

The delay probably scuppers our feint hopes of seeing Red Dead Redemption 2 as part of the Super Bowl 2018 trailers line up, although we may be seeing more of the game sooner than you might fear.

The post also includes a handful of new Red Dead Redemption 2 screenshots, and teases that the company looks forward to "sharing a lot more information with you in the coming weeks". Aside from some story elements like who you play as - including some recurring characters from the original Red Dead Redemption - we still know very little about the sequel, so the promise of more details might be the most tantalizing prospect of all.

You can make the wait a little bit easier by watching us break down everything there is to know about the latest Red Dead Redemption 2 trailer.