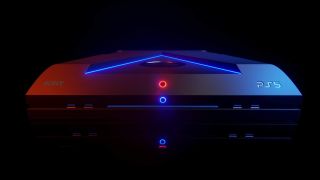 We've entered the year of the PS5, and yet we still don't know what the thing looks like, so someone used Dreams to render their own vision for the console based on those leaked PS5 dev kit images.

My PS5 concept inspired by the leaked dev kit. Had to make another small tweak no one but me will ever notice. I love Dreams.Anyone have any requests for sculpts or suggestions for this sculpt? #MadeInDreams #PS4share #DreamsPS4 #PS5 #conceptart pic.twitter.com/j24QFZuKryJanuary 10, 2020

You can see the deep v-shaped concave from the dev kit leaks has been leveled and lined with blue LED lighting. The design adopts a more uniform matte black theme but retains the surplus of fans seen in the dev kit. Creator Dan Kuhl told IGN that while he based his PS5 concept on the PS5 dev kit, he wanted to "make it look like a more consumer-friendly realistic(ish) console." Kuhl also said the biggest challenge was making the ports on the back appear as legitimate as possible.

Dreams is an early access game for the PS4 that lets players make just about anything, including a full English breakfast. Kuhl's PS5 concept design was made in Dreams and definitely isn't official, but personally I wouldn't be mad if it was.

According to Kuhl, images of his PS5 concept design were being distributed online and peddled as Sony's official PS5 design. Again, although Kuhl's creation is impressively detailed and elegant to boot, it's nothing more than the product of his imagination. For more creative designs, Kuhl's Twitter feed is a treasure trove of video game-related Dreams creations.

As for an official PS5 reveal from Sony, keep an eye out on the conspicuous planning of Sony's 'Experience PlayStation' event kicking off Tuesday, January 14.