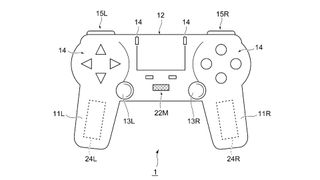 The PS5 controller could feature its own in-built microphone for voice command, headset-free party chat, and more, according to a newly discovered patent from Sony Interactive Entertainment.

First spotted by a user on Reddit, the patent for the controller was filed with the WIPO earlier last year, but has only now just become available for public viewing, and reveals that PlayStation has developed ideas for a game pad with its own microphone sat on the front face of the device itself.

This corroborates with previously leaked patents and images of the DualShock 5, which have also suggested that the next-gen controller could include a larger touch pad, back buttons, and backwards compatibility with the PS4.

That said, it's worth remembering that a filed patent is by no means confirmation that Sony is going ahead and developing this technology for the DualShock 5, and it's entirely possible that this information and associated sketch (which looks nothing like a PlayStation controller) could be for another Sony product altogether.

That said, the stage is set for a big PlayStation Meeting in February, with rumours that Sony plans to fully unveil the PS5 within the next few weeks, so we'll find out soon enough either way. Relatedly, PlayStation has confirmed it won't be attending E3 2020 this year, once again abstaining from the convention to leave Microsoft as the largest presence on the show floor. The silver lining? You can expect a hell of a lot more Xbox Series X news this summer.