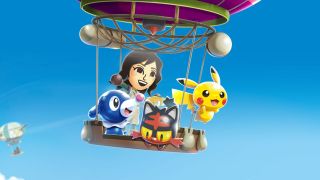 Pokemon Rumble Rush is the next Pokemon game coming to your smartphone, and it looks like you'll be able to start playing it soon. The game's official Japanese site lists it as coming soon to iOS and Android, but it's already launched on Google Play in Australia. The basics of the game will be familiar if you've ever played a Pokemon Rumble since the sub-series started on Wii in 2009: collect and upgrade clockwork Pokemon toys to run through a stage and fight a bunch of other Pokemon toys.

Why are they toys instead of actual Pokemon? I've never figured that out, but my best guess is it's so that kids don't get upset about wrecking dozens of cute little animals at a time. You'll be able to get your toy-battle on across a selection of islands and seas with different Pokemon to encounter, and the entire selection of stages will change out every two weeks. You can also try for bigger rewards with Super Boss Rush events. Here's a look at some gameplay on the Android version.

Pokemon Rumble Rush is the final version of the Pokeland mobile game that was announced back in 2017. The concept sounded like a Pokemon Rumble game in all but name so I'm not surprised it went with a rebrand. What this game isn't is that new Pokemon mobile game from DeNA, Nintendo's partner on mobile projects like Super Mario Run. We're still waiting to learn more official details about that one, but in the meantime, you can tap the screen furiously to make your kitted-out Psyduck toy go all musou on hundreds of mechanical Magikarps.

Hopefully Pokemon Rumble Rush keeps you busy while you're waiting for the main event: the long-awaited arrival of Pokemon Sword and Shield. And don't miss what's hot in games and entertainment this week, check out our latest Release Radar video.