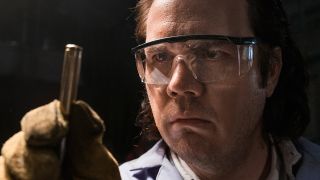 The Walking Dead season 8 is winding down. Except it isn’t really winding down, is it? The penultimate episode of the season saw one of the show’s all-time biggest gross-out moments, several shocks, and a couple of moments that will hit fans right in the feels. There’s also complaints too because… duh. Spoilers to follow.

We finally got what we wanted this week. After Simon’s scheming bit him on the backside, the two big dogs of the Saviors went head-to-head. Who would win? Negan, or Trevor from GTA? As it turns out, Negan regained his place at the top of the mountain – and Lucille wasn’t even used! Simon now takes pride of place propping up a fence outside The Sanctuary. *sniff*

My favorite scene in Black Panther is when Negan and Simon fight for the title of Black Panther #TheWalkingDead pic.twitter.com/CRNmXSeJf29 April 2018

Negan is messing with everyone's heads. Including ours. #TheWalkingDead9 April 2018

Forget Chekhov's gun. This week was all about Eugene’s garlic gruel. It looked grim enough to begin with and we all knew that culinary timebomb was going to go off at some point. And when it did… Poor Rosita. She took the brunt of Eugene’s putrid puke – and fans weren’t happy.

That was low. Even for a coward like Eugene. You don’t use puke as a distraction. He can die now. #TheWalkingDead9 April 2018

The show is full of blood, guts & gore but Eugene intentionally making himself puke (and doing in on Rosita) is one of the grossest things this show has done. #TheWalkingDead9 April 2018

If you stuck with GamesRadar, you already knew what was coming in both of Carl’s letters to Rick and Negan. But, still, it must have made more than a few of you well up. If this is the last we’ll truly see (and hear) of Carl in The Walking Dead then it’s been one helluva run.

so i loved three things about tonight's #TheWalkingDead1. the opening scene with carl's letter to rick(a beautiful letter and chandler delivered the hell out of that voiceover)2. michonne reading carl's letter to negan3. rosita yelling some truth at eugenethe rest sucked9 April 2018

This is the dumbest part of the show, Michonne reading Carl's letter to Negan. #TheWalkingDead9 April 2018

The blind leading the blind

Gabriel is still sticking around, folks. Sure, he’s looking more than a little worse for wear, but, after a stern talking to by Eugene (how cool did he look upon his return, by the way?) he now seems to be aiding the war effort. Or is he? I’m guessing the man in the dog collar has one more trick up his holy sleeve.

I'd also LOVE to see redemption for @TheSethGilliam's AWESOME and underrated portrayal of Father Gabriel. He's traveled QUITE the character arc, and (if he's gotta go) he deserves to go out in a holy blaze of glory. #TheWalkingDead pic.twitter.com/5pPtOzM6lG9 April 2018

Also poor Father Gabriel. But what an arch for the character... And WOW what acting. #TheWalkingDead @WalkingDead_AMC #TWD9 April 2018

Next week: it all ends?

It didn’t feel like a lead-in to a season finale this week. And that’s where most of the grumbles with this episode lie. Yeah, Dwight is inadvertently leading Rick into a trap, but there’s not much else to care about, is there? Let’s hope the ever-dragging feud between Rick and the Saviors comes to a bloody, bloody end, for all of our sakes.

Let’s see.. Rick reads a letter, Negan and Simon have mild drama, and Eugene barfs on Rosita. And this is the episode before the season finale.... seriously what the fuck happened to this show #thewalkingdead9 April 2018

That was an amazing episode! I can’t wait for the finale next week! 😍#TheWalkingDead9 April 2018

So many people are going to die in this season finale. #TheWalkingDead9 April 2018

Amazing second 1/2 of the season. But saw the season finale is next Sun. If the Negan storyline doesn't get resolved, Im over this fuckin show. Been saying this since last season. 1 amazing half season in the context of 1.5 terrible seasons doesnt change my mind #TheWalkingDead9 April 2018

Stuck for something to watch after The Walking Dead? You're definitely going to watch to check out our list of the best new TV shows in 2018.