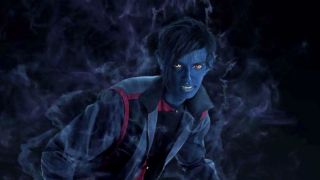 One of the coolest parts of 2003's X2: X-Men United was undeniably the scene featuring Nightcrawler rapidly teleporting around the White House, taking out Secret Service guards with acrobatic grace and power. While the devilish imp has been absent from the big screen since then, he'll be back when X-Men: Apocalypse hits theaters - and a new clip suggests he's as agile as ever.

Nightcrawler was my favorite character from the X-Men, and not just because his powers in the Sega Genesis game were super OP. I always liked that one of the most scary-looking and mistreated mutants in Marvel was literally a priest, preaching forgiveness. Even in this clip, he doesn't seem to want to fight, opting to teleport away from Angel whenever he can. Here's hoping that X-Men: Apocalypse can treat my hero right, and that we'll get to see even better BAMF-ing later this month.