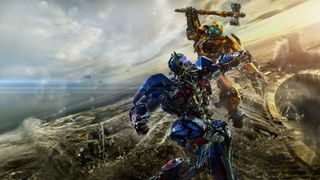 Paramount is looking to relaunch the Transformers franchise, with two new movies currently in development at the studio. Variety reports that script-writers James Vanderbilt (The Amazing Spider-Man/Zodiac/The Meg) and Joby Harold (Army of the Dead/King Arthur) both have screenplays in the works.

The last Transformers movie released was 2018's Bumblebee, which was made on a smaller budget than the main-saga, Michael Bay-directed movies. Bumblebee – a coming of age story – was a success, grossing $465 million worldwide and winning positive reviews from credits; the movie scored a 92% rating on Rotten Tomatoes, while the next highest score in the franchise belongs the first Transformers, sitting at 58%.

The report details how Bumblebee's different approach to Transformers series presents Paramount with new options, and the two mystery projects will like feature brand-new casts. Before Bumblebee's release, Paramount hired a writers' room to develop multiple Transformer movies – though whether either of these ideas came from there is unclear.

Whatever the case, Transformers remains a top priority for Paramount and they hope to attach directors to the scripts soon. No doubt more Transformers news will break over the next few weeks. Just don't expect Shia LaBeouf or Megan Fox to be back.

Wondering what's coming to cinemas in 2020? Then check out all these movie release dates.