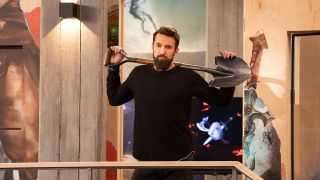 “The vast majority of what we've seen in the media that has anything to do with the video game industry and culture has been so marginalizing and so reductive and just lame," Rob McElhenney – who you’ll likely recognise from It’s Always Sunny in Philadelphia – says.

We’re discussing his new show, Mythic Quest: Raven's Banquet, a workplace comedy that goes behind the scenes of a game studio as they attempt to complete an expansion pack (Raven's Banquet) for their wildly successful game, Mythic Quest. It tackles serious issues facing the industry today, including crunch times, Nazis co-opting multiplayer servers, cheap monetization ploys, and the roles of women and people of color.

What’s apparent is how different the Apple Plus series is to what’s come before. Just look at Grandma’s Boy, a stoner comedy that features a game developer who thinks he’s a cyborg, and a tester who lives with his grandma. Female and person of color representation is non-existent. It is, by all means, a caricature of the industry – not a realistic take on it. Mythic Quest, on the other hand, wants to be a realistic love letter to the community.

"We wanted to make sure that the gaming community understood that we were coming from a place of love and that this was to celebrate the industry in all its glory and all its flaws,” McElhenney continues. “Because if you don't do that, then it seems like it's pandering. And if there's a community that can recognize pandering, it would be the video game industry, and they do – not – f*cking – like – it."

There's also a gruff female developer that's inspired by a programmer Megan Ganz (who co-created Mythic Quest with McElhenney and It’s Always Sunny’s Charlie Day) met while doing research for the show. "She was just as surly as we wanted her to be,” Ganz says. “She didn't give two f*cks about anything...  It was fantastic."

However, while Mythic Quest may come from the creators of It's Always Sunny, the show is not full of "live action cartoon characters," as McElhenney calls the Sunny gang. There are many moments of sweet sincerity, and most of them are handed to us gently by actress Ashly Burch, who you may recognize for her roles in the games The Outer Worlds (she plays Parvati) and Horizon: Zero Dawn (Aloy).

Not only does Burch portray the game tester Rachel – who has an adorkable "will they/won't they" relationship with fellow tester Dana (Imani Hakim) – but she also wrote the seventh episode, "Permadeath". What’s remarkable about the episode is how her love of games shines through. "Dana and Rachel are sort of the voice of gamers,” Burch says, her voice entirely her own (though there’s a slight twinge of Parvati). “They just genuinely love that world and the game that they're a part of. What's nice about that is that there's no manufacturing that for me, I've always loved games.”

Dana and Rachel "represent that sort of pure love of gaming," Burch continues, adding how their adoration for the art form juxtaposes McElhenny's Ian’s constant concern over content creation, and Pudi’s character’s attempts to use loot boxes to bleed players dry. "[The show’s] not just an indictment and it's also not just a celebration,” she says. “It's both. It shows you all sides. Like here are the ugly bits, and here are the parts that are actually really lovely and really heartwarming."

Considering how Ubisoft’s Film and TV departments are listed among the production companies who worked on the series, you would expect Mythic Quest to be an authentic look at the industry. Yet, the fact the show offers blistering takes on controversial issues that affect a community that Ubisoft resides within may come as a surprise.

"We were happy to let [the writers] have the freedom to create and tell a story they found interesting," executive producer and Ubisoft’s director of television development Danielle Kreink says. "We didn't wanna put any limiters on it. Like you don't put a limiter on a shovel [a reference to the show], you don't put a limiter on a story, and you let them have fun and find the core and tell the human story that we all know is behind these big issues in the workplace."

Ubisoft's Head of Film and Television Jason Altman – himself a game producer for 15 years – approached McElhenny with the idea for Mythic Quest, and convinced him after a trip to Ubisoft Montreal. From there, it was about making a show that felt real – but not surreal. "We wanted to make sure that we knew how to balance authenticity and acceptability," he says. "I put on my old game producer hat and I was there to really help them understand all those different roles and who those people are and how games get made."

Altman and Ubisoft’s work on the show didn’t stop there. Not only did they want to make the writing feel real, but also made the fictional game within the show a reality. “To do that, we worked with Red Storm, our internal dev studios," Altman says. "We worked with a real dev team to make a fake game that looks and feels like a real game for a TV show."

Creating that "fake" game provided a new challenge for Red Storm, as it was developed for comedic purposes while also needing to be a playable sandbox. The result is a game that has World of Warcraft elements, comically bright blood spatters, and a diving mechanic straight out of Assassin's Creed.

Of course, this wouldn’t be a show about the industry without a few other games making cameo appearances. Ubisoft didn’t prevent the team from broaching other studios to include their content – and if you look closely, you might catch a glimpse of your favorite games. And ultimately, that’s what Mythic Quest is: a homage to the gaming industry that also serves as a hilarious, constructive criticism of it. The show’s not as cruel as Sunny, nor as cartoonish, but it's sincere, realistic, and easily replayable – I mean rewatchable.

GamesRadar+’s quick question for the Mythic Quest team: what's the first game you fell in love with?

Rob McElhenny: Is it okay if I have three answers? First, original Legend of Zelda. I'm much older than you, but that game, when it came out – I didn't have Nintendo but my neighbor did – I'd be in school and I'd be consumed with it. It really transplanted you into a different world, and that was the first time that I ever really felt anything like that.

Third, The Last of Us. That was the first time I had a truly emotional connection to the story. There's something about Last of Us, where you are at the edge of your seat and you don't know how it's gonna end, and you want to know desperately, like a movie. I've never experienced that before.

Megan Ganz: Ocarina of Time. That was my favorite. I loved N64. Goldeneye also. I didn't really make the jump from that controller to the two joystick controller. But now I'm getting back into it because I can say that it's research. I recently played LA Noire with my husband which was really fun and appealed to my detective-loving side.

Ashly Burch: I think mine is Harvest Moon 64. I was an anxious kid… I'm still an anxious kid. I'm an anxious adult. When I was a kid my anxiety was pretty bad and so the only thing that would calm me down is that I would come home and play Harvest Moon 64. And now I'm doing that with Stardew Valley, kind of. It's almost meditative, that repetitive day in and day out. I mean, you're basically doing chores, but there's something about it when it's in a game context that's really fun. And the game that inspired me to become a voice actor was Metal Gear Solid. You said one and I picked two, I cheated.

Jason Altman: Legend of Zelda. That was really the first one that took me. And that kind of set me up as a lifelong RPG gamer.

Danielle Kreinik: I was a big Sim City fan and then moved to The Sims where it was like an addiction in college. It's my most favorite game in the entire world, I have it on my phone (laughs).

For more stuff to binge, check out the best new TV shows coming your way in 2020 and beyond.