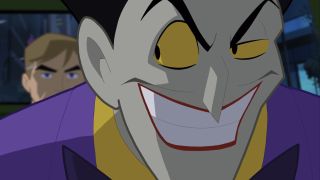 Jedi Master Luke Skywalker isn't Mark Hamill's only role, you know. He's been The Joker, The Trickster, and Swamp Thing - and that's just counting DC Comics characters. He's a particularly prolific and talent voice actor, so try to keep in mind which Mark is the real one as you watch this animated short from Cartoon Network's Justice League Action:

As for the real Mark Hamill (won't he please stand up), he's currently being coy and mysterious about his role in Star Wars: The Last Jedi as we draw ever closer to that December 15 release date. Is Luke Rey's father? Hamill has certainly joked about fans' obsession over our leading lady's parentage. Is Luke evil in Star Wars 8? Hamill says from a certain point of view, Luke's always been the bad guy. Maybe we'll find out in yet another trailer, but if not I don't mind waiting.

I guess what I'm trying to say is keep on being Mark Hamill, Mark Hamill. You are a treasure, whether you're the Joker, Trickster, Swamp Thing, Luke Skywalker, or just being yourself.