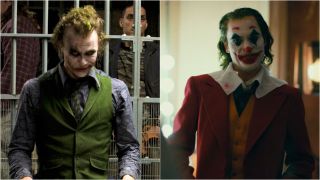 Phoenix won the award for playing the eponymous character in the supervillain origins movie Joker. Ledger, who passed away in 2008, played the same character in the Batman movie The Dark Knight.

“When I started acting again and going to auditions, I’d get to the final callback and [I’d] always lose to this one kid, no actor would ever say his name because it was too much,” he recalled, referring to DiCaprio. “You have been an inspiration for over 25 years to me and so many people.”

Phoenix also joked about Bale – who played Batman in The Dark Knight – being so good “it’s infuriating,” quipping: “Just suck once.” Watch the full speech below.

The SAG Awards took place on January 19th and are often a good indicator of who could win at the Oscars later in the year. Phoenix now looks certain to take home the Best Actor award – the same award Ledger won posthumously for playing Joker.

Meanwhile, the night's biggest winners were the cast of Parasite, who took home the biggest award of the evening: Best ensemble cast – Film. Find the SAG Awards winners list in full here.