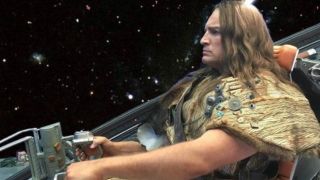 Guardians of the Galaxy 2 is great, duh. But it had a big ol’ Nathan Fillion-shaped hole that disappointed pretty much everyone who saw his japes on the Guardians set. Heck, even director James Gunn was a bit down in the dumps cutting an ‘appearance’ from one of his best friends. Gunn, though, has revealed who he was meant to be playing, and why he could still return in a future movie (hint: it’s a superhero).

Here’s how Gunn described the cut scene: “I really do love the character of Simon Williams/Wonder Man in the comics - a sometimes douchey actor/superhero - and could see Nathan clearly in that role (not because he's a douchebag but because he's great at playing one). But, of course, in a movie set 99.9% in space I didn't really have a place for him. So in a small flash to earth [sic] I decided to put a theater playing a ‘Simon Williams Film Festival,’ with six Simon Williams movie posters outside.”

Even for Marvel aficionados, Wonder Man would’ve been a super obscure reference. He’s a perfect fit for Fillion though: an arrogant actor with movie-star good looks (obviously) and strength and speed to match most Avengers. Which makes me wonder why he isn’t already a thing.

Gunn isn’t giving up on his good bud Fillion making a proper, fully-fledged appearance in the MCU in the future as Wonder Man, saying, “I think we can consider them canon for the MCU, and I hold onto hope that Simon Williams will rise again!!”