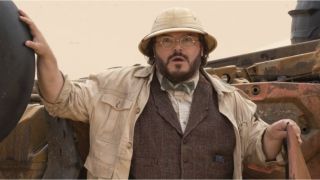 Actor, comedian, musician, and most-recently, YouTuber Jack Black has tentative plans to retire from acting after his next movie.

The star of Jumanji: The Next Level told Balance "a big part" of the reason he plans on retiring early is his desire to spend more time with his wife and two sons.

The 50-year-old actor says other career endeavors are calling to him as of late, including his comedy rock duo, Tenacious D. "Well, I’ve got another Tenacious D record that I’d like to make," said Black. "Maybe one more movie. I’m kind of enjoying the idea of early retirement," Black said before adding, "Not so early. I’m 50."

Black also says he isn't closing any doors yet, and that his plan to retire from acting could change at a moment's notice, particularly "if Tarantino comes a-knocking." The actor also left open the possibility that he'd take on a role in a TV series near home, so that he could return home to his family after each shoot.

Don't remorse too soon though, as Black's language in the interview veers from serious to borderline sarcastic, putting into question his determination to retire from acting. Even Black himself says everything's up in the air at the moment. "We’ll see. I’m not a big five-year plan kind of guy though. I don’t really look down the road. I kind of take it day by day."

Jumanji: The Next Level releases on Friday. Check out every other exciting movie coming in 2019 and beyond.