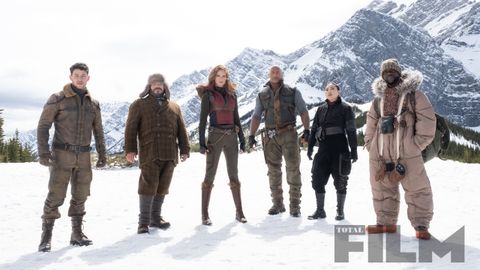 Some of the vibrancy has worn off but this Rock-solid sequel has enough giggles and gasps to attract herds of viewers.

In December 2017, it looked to be game over for Jumanji: Welcome To The Jungle before it even hit our screens. A reboot of a family fantasy franchise (Jumanji and sorta-sequel Zathura: A Space Adventure) that had laid dormant for 14 years? A videogame movie? And opening mere days after Star Wars: The Last Jedi? That’s your three lives gone right there. Or not, as the case proved to be: Jake Kasdan’s always frolicsome and sometimes rollicking update took $962m at the box office.

The downside of this success story? This sequel arrives with next-level expectations, meaning it needs to deliver on the promise of that bold title as it again goes up against a Star Wars movie, The Rise Of Skywalker. Well, Kasdan and his two co-writers have a three-point gameplan: 1) switching up which teens - Spencer (Alex Wolff), Martha (Morgan Turner), Fridge (Ser’Darius Blain) and Bethany (Madison Iseman) – inhabit which avatars (Dwayne Johnson’s Smolder Bravestone, Karen Gillan’s Ruby Roundhouse, Kevin Hart’s Mouse Finbar, Jack Black’s Prof Oberon); 2) introducing Spencer’s granddad Eddie (Danny DeVito) and his old pal Milo (Danny Glover); who are also sucked into the game; and 3) opening out the world, so that our heroes face not just jungle terrain but also deserts and snow-capped mountains.

Now on a new quest (outlined, naturally, by Rhys Darby’s NPC Nigel Billingsley) to recover the Falcon Jewel from Jurgen the Brutal (Rory McCann – aka Game Of Thrones’ The Hound), the gang battles a flock of outraged ostriches, hungry hyenas and militant mandrills as they solve various puzzles to graduate through increasingly difficult levels. En route they bicker and banter, with Eddie and Milo naturally finding time to rake over the grievance that’s stalled their friendship for 15 years. Meanwhile, Martha and Spencer, whose romantic relationship is under strain, talk out their issues.

Slow to start before powering up nicely, Jumanji: The Next Level is plenty of fun and, just as things start to drag, introduces Awkwafina as new avatar Ming, a cat burglar whose key weakness is pollen. The stars, clearly, are having a ball aping each other’s speech patterns and mannerisms – Johnson nails DeVito’s nervy snark and the usually motormouthed Hart neatly matches Glover’s deliberate delivery – even if the body-swap gimmick inevitably loses a little of its freshness the second time round.

Next level it might not be, but it does have game. Still, any future instalments might want to redevelop and really shake things up. Which, judging from coda, Kasdan and co already know. Expect Jumanji: This Shit Gets Real to stampede into cinemas in 2021...

Jumanji: The Next Level review: "Might not be next level, but it does have game"

Some of the vibrancy has worn off but this Rock-solid sequel has enough giggles and gasps to attract herds of viewers.