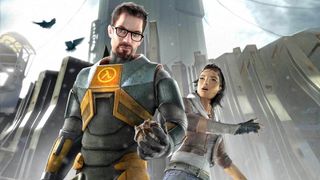 After a premature reveal, Valve confirmed that all of the major Half-Life games and add-ons are now available for free on Steam as part of a pre-Alyx promotion. They'll be free to play - not free to own - for the next two months, or up until the release of Half-Life: Alyx, which is still on track for a March release.

This free to play offer extends to Half-Life, Half-Life 2 and its supporting episodes, and major additions like Half-Life: Opposing Force, Half-Life 1: Source, and Half-Life: Blue Shift. However, Half-Life 2: Deathmatch is still $4.99 at the time of this writing.

Valve will release a new Half-Life collection ahead of the upcoming release of Half-Life: Alyx, according to Steam alerts archived on ResetEra and the Steam forums. Not only that, as an added way to ring in the long-awaited sequel, this new collection will apparently be free to play (not necessarily free to own) "until [the] launch of Half-Life: Alyx."

The Steam alert in question was captured in English and Spanish by independent users, and it certainly looks legitimate. It seems to have been sent prematurely on January 20 and almost immediately pulled, likely due to some sort of scheduling error. If it is legit, we can expect to see it again as we get closer to Half-Life: Alyx's March 2020 release date. The alert says the collection will be free until the launch of Alyx, so the freebie window will likely start one or two weeks ahead of time.

It's unclear what all this new Half-Life: Collection will include, but in addition to the original Half-Life and all the episodes of Half-Life 2, it may come with the wealth of DLC and multiplayer extras which are also available on Steam, such as Half-Life 2: Deathmatch. There's also no way to know if the collection will just be a Steam bundle or a new item in its own right - serving as a catch-all entry point for new players - but it shouldn't matter much in the end.

This wouldn't be the first time Valve has promoted the original Half-Life games on the back of Alyx's hype. Shortly after the VR sequel was announced, both games were available for just $1 on Steam. So it really wouldn't be a surprise to see Valve temporarily give the original games away to drum up Alyx.