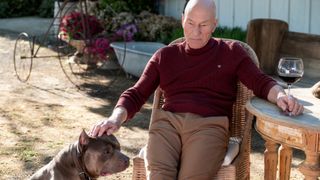 After an excellent debut rocked the internet with a "totally satisfying evolution of the Next Generation story", there's no better time to find out how to watch Star Trek: Picard online or on your TV wherever you happen to be worldwide. Especially now that episode 2 is hinting at big things to come for the series.

Want to jump straight into the action? We've got all the answers for you on how to watch Star Trek: Picard below. You'll then be in prime position to watch each new episode as they launch at the end of every week (you're welcome).

There's certainly enough reason to be excited; alongside the comeback of Patrick Stewart's beloved Captain Picard from the Next Generation, the show is laced with mystery and more than a few familiar faces. Set almost two decades after the events of Star Trek: Nemesis, it features Picard being drawn out of retirement to protect a mysterious woman. This series also provides our first real connection to the new movies, dubbed the 'Kelvin timeline' - it takes place 15 years after the destruction of Romulus that kicked off 2009's reboot, a film that sent Spock hurtling back through time (thus creating an alternate history inhabited by Christopher Pine and a whole ton of lens-flare).

Anyway, let's get right down to it - here's how to watch Star Trek: Picard no matter where you are in the world. Engage!

How to watch Star Trek: Picard online - US

CBS All Access | $5.99p/m (commercials), $9.99p/m (no commercials)
Want to watch Star Trek: Picard in the US? This is the only way - it'll appear exclusively on CBS All Access.View Deal

If you're based in the US, the answer to the question of how to watch Star Trek: Picard is easy - just sign up to CBS All Access. The show will appear there exclusively, and new episodes are set to debut on Thursday each week. Can't wait that long? Don't worry, two seasons of the excellent Star Trek: Discovery are also available on CBS to fill time between instalments.

Because CBS All Access costs $5.99 per month with a week's free trial (including commercials), it's not too deadly on your bank balance. You can always go for a commercial-free version for $9.99p/m, too. Either way, both will get you Picard on demand.

Amazon Prime | £7.99p/m
Discovery appeared on Netflix in the UK, but Picard's decided to go with Amazon Prime for its maiden voyage. Sign up and watch here - there's a 30-day free trial option too. View Deal

As for those in the UK, here's how to watch Star Trek: Picard - get Amazon Prime. The new series appears there exclusively every Friday (a day later than our lucky US cousins), and you can get your paws on it for £7.99 per month after a 30-day free trial. Because the service is packed with other must-watch bits of TV like The Boys, Jack Ryan, and the live sport, we'd say it's worth the cash. Want to see what else is available? Check out our feature on the 30 best shows on Amazon Prime.

How to watch Star Trek: Picard anywhere in the world

First up, if you're already an Amazon Prime member, take a look online today or possibly tomorrow on January 24 as multiple countries around the world will be showing Star Trek: Picard online on Prime Video. Germany, Austria, Japan, UK, Belgium, France, India, Italy, Spain, Poland, Brazil, Australia and more are all Primed for Picard.

If you're not a Prime member or it's not on in your country, you could always go for the VPN option to watch via another nation's streaming service, like America's CBS All Access (VPNs and Amazon Prime don't get on too well).

These clever VPN systems hide your location from the web for security reasons - no-one is able to track your data or pilfer your details - but they also allow you to overcome geo-blocking. This is a process whereby certain regions aren't allowed to access content, which is obviously a pain if you're on your vacation and aren't able to access streaming services due to them being blocked in that part of the world.

With that in mind, we've listed our favorite VPN service below, ExpressVPN. For a broader range, mosey on over to our guide to the best VPN for Netflix. This a decent time to take a look at Express VPN though as there's a superb offer on where you can get an additional three months FREE on a 12-month package and save 49% (shorter packages are available too). ExpressVPN works on a massive range of devices like laptops, MacBooks, Amazon Fire TV Stick, Apple TV, iPhone, Android mobiles and more. ExpressVPN is also offering a 30-day money-back guarantee, which is great if you change your mind and decide the VPN isn't for you.