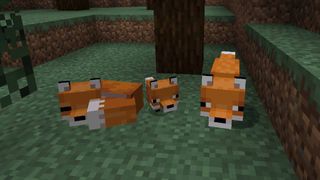 Those regular blocky updates may add many things but how to tame a fox in Minecraft is likely top of your list. You might have seen some of these cute critters kicking, and in case you weren’t already in the know, you can catch a couple of your very own from version Minecraft 1.15.1 onwards. If you are wanting your very own orange-tailed pet? Here’s our guide on how to tame a fox in Minecraft.

Where to find a Fox in Minecraft

One thing to note about MInecraft foxes is that they’re nocturnal animals, which means that anyone looking to begin their search is going to have to do so when it’s dark. Of course, things get a little more dangerous when you’re around, so newcomers are going to want to make sure that they can fend off something that might want to turn your new pet into dinner before they go fox-searching.

Foxes can be found in taiga biomes at night, usually because they like nesting in leafy forests. You can find foxes in the following taiga biomes: taiga, giant tree taiga, and snow taiga biomes. You can also find them in taiga villages if those are kicking around your world. There’s a small chance for foxes to spawn as cubs, and if you’re in a snow taiga biome, then the foxes will be white instead of the classic russet with white tails.

Use Sweet Berries to tame foxes in Minecraft

So, night has fallen and you’ve found a fox but they keep scampering away from you. Like other skittish creatures in Minecraft, foxes are a little shy so you have to sneak to approach them. However, an easy way to bridge the gap between humankind and foxkind is to have some Sweet Berry on hand. They love this stuff, so make sure you’ve got a handful before sneaking up to them and interacting with the fox. Little hearts blooming overhead will indicate that they’ve received your gift.

Once you’ve been able to do this enough times - we found that four or so helpings of Sweet Berry did the trick - the happy critter will be tamed and will be your friend. If you feed two foxes in the same vicinity as each other Sweet Berries and tame them both, they have a chance to procreate! Foxes that trust you will also occasionally bring you things that they pick up in their mouths, and though we mostly received feathers, we’re sure that there are other cool items that they can fetch if given the chance.

Wanting to tame an army of foxes in Minecraft would probably be a bit like chucking Sweet Berries into an animal-shaped vacuum if not for one simple save: any fox cub that’s the product of two tamed foxes will automatically be born tame. That’s right.

You only really have to use those Sweet Berries on the original breeding pair of foxes and once that’s done, their offspring will be automatically tame and warm up to you. We noticed that they were quick to scamper off once the sun rose, so you’re going to want to fence them in if keeping a large fox pack is something that you want to do. Fox cubs will stick close to their parents instead of following the player around, so you don’t have to worry about having a hanger-on while you’re knee-deep in bashing enemies. Foxes that are trusting enough will harm enemies who are harming you, though we would want to leave cubs out of it for now.

Now that you’ve got a better idea of how to tame a fox in Minecraft, all that’s left is to venture forth into the biomes of your choice and to pick up some loyal pets for yourself. Just arm yourself with Sweet Berries, patience, and supplies for some night-time scouting until you find these furry, soon-to-be friends.