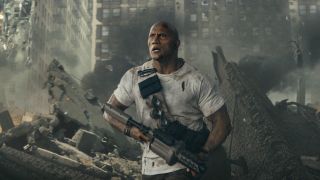 With the summer cinema season (very) slowly approaching, 2018’s blockbuster contenders are coming out to play. Arcade game adaptation Rampage is gearing up to be one of the biggest, smashiest films of the season.

Dwayne Johnson stars as the human trying to save the day while three genetically-mutated monsters lay waste to all the tower blocks in their path (much like they did in the aforementioned game). Our sister publication Total Film magazine has a new look at the upcoming film, with an exclusive shot of Johnson and, believe it or not, it actually makes the actor look small...

Now, it’s not often you see the artist formerly known as The Rock looking tiny, and if you think the scale of this shot of a caged-up Johnson makes him look less humungous that usual, you ain’t seen nothing yet, as director Brad Peyton explains. “The thing that was very different [to previous collaboration San Andreas] was, no one’s ever made Dwayne look small before,” he tells Total Film. “And in shooting this, it was kind of exciting, but very strange.”

Every upcoming video game movie for 2017 and beyond

When Johnson’s primatologist Davis Okoye goes up against the modified gorilla, wolf, and crocodile (a change-up from the game’s genetically altered humans), the standard rules for shooting an action superstar were thrown out of the window. “Every major scene with a creature, I had to shoot Dwayne looking tiny,” says Peyton. “The camera would sometimes be three storeys up, looking down at Dwayne. Because the creatures are so large, and you’re balancing out the scale a lot.”

Rampage will be in cinemas on April 13, but you can read more about it in the latest issue of Total Film magazine, which hits stores on February 9.

To make sure you’re always up to date with the latest movies, why not subscribe to Total Film? As well as saving money on the cover price, you’ll get the issue delivered to your doorstep every month, come rain, shine or monster invasion. Plus, you’ll get an exclusive subscriber cover that can’t be bought in shops.