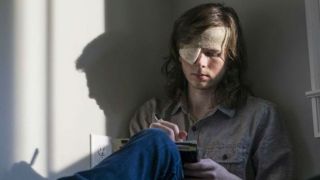 The Walking Dead season 8 still hasn’t got over Carl. The second episode may not have uttered his name until 38 minutes into the episode (trust me, I counted), but his presence – and lack thereof – was certainly felt, none more so than with his pair of letters: one to his dad, and one to Negan.

The show chose to forgo a voiceover when showing Carl’s message to Negan, and it was a blink-and-you’ll-miss-it moment, but Reddit user awakeningosiris has deciphered part of the message – and it hints at a peaceful future for everyone.

First, the contents: while some of the letter was obscured, it reads (complete with gaps):

Even with some of the letter being illegible (fun fact: that’s because Chandler Riggs’ handwriting is so awful – he admitted it himself), there’s a tease of a truce in Rick and Negan’s near future… except Rick is the roadblock getting in the way of a hesitant handshake.

Rick chooses to open Carl’s letter to Negan. Of course he does. This is a man who is obsessed with finding a reason for Carl’s death when there was none. He chooses to blame Negan, instead of letting the past lie. He ignores his son’s own words in favour of growling at the leader of the Saviors down a walkie-talkie. Just when it seems that a dialogue could be opened, Rick shuts it back in Negan’s face.

In fact, Negan comes off the more remorseful of the two. Rick only sees an endgame involving Negan’s death. Negan, after hearing of Carl’s letter, may choose to see things differently and opt for peace. The trouble is, only one of those trains of thought will win out – and there’s bound to be more bloodshed before we reach that point.

That’s one question answered, here’s five more to mull over: 6 questions I had after watching The Walking Dead season 8, episode 2