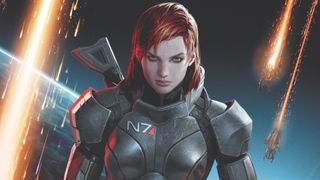 We all remember our first time. Struggling to control a rumbling tin can on a mud brown planet. Putting food in the oven and finishing your homework while you wait for the elevator loading screens to resolve. Falling madly in love with a charming sniper rifle-toting alien. When Mass Effect first reared its head in 2007, it quickly cemented itself as one of the most essential RPGs of its console generation, with its influential sequels leaving a lasting impression on the genre. But maybe you’re looking for something to move on to now the series is in stasis? I’m Commander Shepard, and these are our 10 favourite games like Mass Effect.

Jumping from Mass Effect to Dragon Age is like going from Star Wars to Lord of the Rings - if you’re into high-stakes fantasy and rich characters, what’s not to like? Whilst some decry its faults and proclaim Origins as the ‘true’ Dragon Age experience - that game did predate the first Mass Effect, and Dragon Age: Inquisition’s war table metagame mechanics will be like stepping into a pair of comfy loafers if you enjoyed the man-management and character-building side content of Mass Effect. In the absence of guns there is magic, and instead of aliens to flirt with, you’ve got dwarves, horny qunari and even egg-shaped elven apostates with unexplainable sex appeal.

Jumping from Mass Effect to Star Wars is like… ok, never mind - Bioware did actually make a Star Wars game, and you’d have difficulty arguing it's not the best one ever made. Despite dropping in 2003, KOTOR is just as enthralling in 2019 as it ever has been - it has since become a very important part of the expanded universe of Star Wars, with its twist-laden plot and memorable characters being referenced and expanded upon in other works by the dreamweavers behind the Skywalkers. There’s even a movie coming based on the lore it established. All of this speaks for itself - if you’re a self-respecting Mass Effect fan, KOTOR should be at the top of your list of games to play once you’ve had your fun with the Normandy crew. I don’t need to give such an iconic game any more lip service - but to illustrate how good it is, shortly after writing this graf I found out that the game was available on iPad, bought it and played through the opening world instead of getting a good night’s sleep.

Another Bioware classic, Jade Empire is often overlooked in the company’s back catalogue, despite being an absolutely fantastic RPG. Not many games lend from the rich tomes of Chinese Mythology or pull it off in such bombastic fashion. If you’re looking for a game as well-written and enjoyable as Mass Effect in a completely new setting, look no further than Jade Empire, with its vibrant colour palette and gripping narrative. It also has an experimental real-time martial-arts combat system instead of your typical turn-based fare! John Cleese is in it as well, for some reason…

Available on: PS4, Xbox One, PC, and coming soon to Nintendo Switch

As the Mass Effect series started to wane in the mid to late-10s after the end of the trilogy, I for one found myself looking elsewhere for my open-world RPG fix. Whilst The Witcher 3 was already a smash hit upon its launch in 2015, I can’t help but keep playing it even years later, which is a testament to its remarkable design. CDProjektRed’s behemoth will no doubt go down in history as one of the best games of its generation, an instant classic with a deeply compelling main character and a gorgeous world that never compromises when it comes to character development and quest design. If you’re looking to make meaningful decisions, deal with warring factions and most importantly, look good doing it - you will certainly enjoy The Witcher 3 and it’s nuanced but addicting systems. Plenty of romance options too if that’s your game.

Ok, hear me out on this one. I know it seems a bit left field to throw in a VR game in a ‘games like Mass Effect’ article, but having played Bridge Crew, it is the ultimate fantasy if you enjoyed your time on the Normandy. With a crew of up to four players in VR you must ward off alien threats and take up your role as a true space commander, initiating hyperspace and completing quests with your friends in virtual reality. The stakes are high and the adrenaline quickly starts pumping as threats come into view. The game also uses the Star Trek property, which should be a comfortable shift for Mass Effect fans.

A more dystopian vision of an augmented future, Deus Ex: Human Revolution was… well… revolutionary for the franchise when it launched in 2011, reviving Deus Ex for a modern audience. As an Immersive Sim, actions speak louder than words, and you can go about scenarios in a multitude of different ways as the wonderfully stoic Adam Jensen. Whilst there’s little space exploration in this ARPG, there’s plenty of crucial choices to be made with a host of well-written characters, as well as fleshed out systems to finetune Jensen and turn him into an unstoppable killing machine. The story is well-paced and the more contained setting is executed with detail and care.

Perhaps you want quite a drastic tone change from Mass Effect often supplied by the more eccentric and emotional narratives of a JRPG? Final Fantasy 15 would be a good entry point ahead of more traditional Japanese action RPGs, given that it retains some of the quality-of-life features you’re used to with games like Mass Effect whilst still weaving an epic novelesque tale. Much like Mass Effect, travel is a major factor in Final Fantasy XV as Noctis and the good boys chart Eos in a blacked-out convertible. It’s not quite the Normandy, but XV makes up for it with the incredible character development that should make any Mass Effect fan swoon. The camaraderie and honour-bound friendship of Noctis’ road-tripping friends is difficult to ignore as they start to open up across the course of the game. It’s an epic, unforgettable adventure grounded in sentimentality that delivers emotional sucker punches on a regular basis.

So despite being panned upon release and the discourse focusing on decrying its uncanny facial animations, walk cycles, backwards guns and bugs - many let slip a half-decent Mass Effect game that is still worth your time if you’re a fan of the series. Perhaps you’ve played it already, but many decided to skip Mass Effect: Andromeda before giving it a fair shake, and that’s criminal when you see what’s on offer - especially if you’re not fussy about a few areas devoid of polish. The combat is really fun and refined, and the romance options and backstories of your crew are well-written and interesting. Enough time has passed to the point where the game’s launch woes have been fixed, and the 20+ hour story is well worth it, especially if you’re just looking for more of the same.

Oh, Anthem. Bioware’s experiment didn’t exactly pay off - the shared world shooter started floundering not long after launch. Yet one of the diamonds in the rough of this game is the story and characters in the world, especially those found in Fort Tarsis, where Bioware’s talents are actually tapped. Whilst the meat and potatoes of Anthem is still fairly dull co-operative missions, there’s a lot to like about the intriguing world behind it, and the relationships you form and break with the human crew as a Freelancer. Whilst the dialogue choices are mostly insignificant, some of them have consequences, and the vocal delivery and animations are well done. If you’re a massive Bioware fan who can put up with the chaff, Anthem can be fun with friends, especially if you liked Mass Effect’s more tech-based combat.

A top-down old school turn-based RPG, Divinity Original Sin 2 is a tale of unbelievable scope, with more complex systems than most and a traditional style that will please tabletop junkies. Mass Effect fans will enjoy the character interactions and backstories of the fleshed-out companions, as well as the sheer abundance of inhabitants that you can talk to and tinker with. Released to unanimous critical acclaim, there’s also the option of four-player co-op with your friends which is a good way to burn hundreds of hours and figure out which of your mates are natural born leaders.