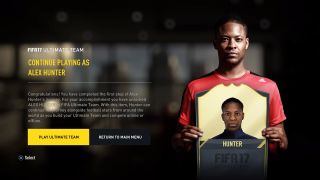 The biggest new feature in FIFA 17 is its Mass-Effect-inspired story mode named The Journey, which follows fictional character Alex Hunter in his quest to make it from a Clapham Common under-11s team to the Premier League. As of November, Hunter had banged in an incredible 164 million goals for users across the globe – but exactly what else happens along the way? I’ve finished it, and can take you through the key events that happened in my playthrough. Spoilers ahead, obviously.

The early stages see you choosing your favourite of the 20 Premier League clubs and then, on completing a six-stage academy ‘exit trial’, selecting the one you want to play for. (And it can be a different one to your favourite team selection, should you do wish.) Pre-season encompasses sub appearances in various American stadia – a clever means of showing off the in-game recreations of Seattle and Vancouver’s incredi-grounds – but a handful of matches later, after your parent club signs a star player, you’re farmed out on loan to the Championship.

I start the mode as Crystal Palace, with Harry Kane’s arrival the cause of my departure to the second tier. The three choices given at this point are Newcastle United, Norwich City and Aston Villa - again, smart options on EA’s part as you get to play loan fixtures in official stadiums, with St James' Park, Carrow Road and Villa Park all remaining in the game despite those clubs’ recent relegations.

Now for the really spoiler-y stuff. Halfway through the season, best pal Gareth Walker departs for your ‘biggest rival’ – in my Palace game, this is set as West Ham – and you’re recalled from loan in order to fill his shoes. You play the rest of the season either in the starting line-up or from the bench, but bizarrely I never once see or replace Kane on the pitch. (He still makes regular appearances in cut-scenes.)

A key character in the mode is your grandad, Jim Hunter. It’s made clear through cut-scenes and Martin Tyler’s on-point commentary that despite a glittering career in the ‘60s, Jim never won the FA Cup – so from January onwards you can see exactly where the story is headed. Not that this predictability makes it any less fun to play.

Sure enough, my playthrough culminates in an FA Cup Final showdown against Walker’s West Ham at Wembley, with Hunter’s former best mate burning all bridges in the tunnel beforehand by insulting Alex’s absent father. After a relatively straightforward victory, Hunter wordlessly lifts his devastated former pal off the turf, before raising the trophy with his team-mates. Hunter’s dad at this point appears outside the ground, only for Alex to walk away without reconciliation.

The final cut-scene sees a family celebration at Hunter’s plush London apartment, closing with a news broadcast tipping him for an imminent call-up to the England squad.

The Journey lasts a single season, then, and took me around 16 hours to complete. Five Ultimate Team rewards – mostly gold loan players – are offered along the way, the final one being Hunter as a playable character who you can keep in your FUT squad permanently.

Want to know how the rest of the game plays? Be sure to check out our FIFA 17 review.