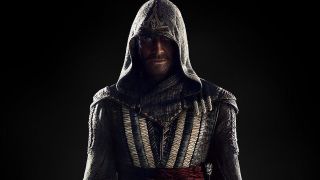 Eagle vision on? Good. Here's a behind the scenes look at Michael Fassbender in the Assassin's Creed movie. This exclusive image - see it in all its uncropped glory below - from the new issue of Total Film magazine shows Fassbender in action as the Spanish Inquisition battling Aguilar.

The movie was shot on a number of locations as director Justin Kurzel quested to bring a sense of realism to proceedings. From Malta to Almeria in Spain, the shoot constantly put the actors through their paces.

Not only did stuntman Damien Walters swan dive 125ft for a real life leap of faith but Kurzel has even decided to shoot all the 15th century regressions in their native language of Spanish. Yep, the Assassin's Creed movie's historical sequences will have subtitles. Other hidden blade related news this week includes the fact that the Assassin's Creed movie's robot claw Animus might end up in the games.

This image can be found in the new issue of Total Film magazine out today, along with three other exclusive images and interviews with director Justin Kurzel and stars Michael Fassbender, Marion Cotillard, and Jeremy Irons. Pick it up today or subscribe so you never miss and issue.