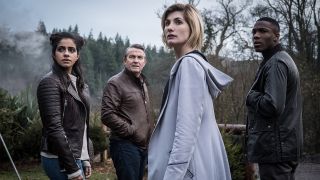 Doctor Who finally has a return date! The Thirteenth Doctor is heading back onto screens this coming New Year's Day – January 1st, 2020. The BBC has also confirmed that season 12 will last 10 episodes, with subsequent episodes airing on Sundays.

We also have some new details about the premiere, which will be an action-packed two-parter titled "Spyfall". The episode will reunite Jodie Whittaker's Doctor with Ryan (Tosin Cole), Yaz (Mandip Gill), and Graham (Bradley Walsh).

The trailer for Doctor Who season 12 has already been released, and a number of guest stars have been confirmed, including Stephen Fry, Sir Lenny Henry, Robert Glenister and Goran Višnjić. The BBC has also revealed that the Judoon and the Cybermen will also be threatening the Doctor once again in upcoming episodes.

Showrunner Chris Chibnall, who has written "Spyfall", recently teased the episode. “It’s big, the first episode,” he revealed at a roundtable at which GamesRadar+ was present. “It’s the biggest episode we’ve done. It might be the biggest episode the show has done. Lots of action, lots of fun.”

Chinball was also keen to stress that the show will “continue the ongoing journey” with the Thirteenth Doctor. “We want to do big action-packed emotional, scary, funny stories and I think what we want to go up a level from last year,” he says.

Need more telly in your eyeballs? Then why not find out what's new on Netflix?