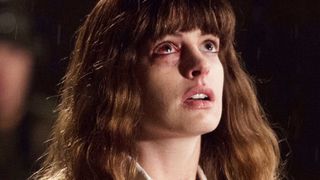 The monster movie has been knocking around in various forms since the earliest days of cinema, but usually the monster is squishing humans, not being controlled by them. In the age of an updated Godzilla courtesy of Gareth Edwards, Jaeger vs Kaiju smackdowns in Pacific Rim, and a Kong that's bigger than anything we've seen before, Colossal is an entirely different beast.

Yes, there’s a big monster here, but the focus is very much on the human that controls it. Premiering at Toronto Film Festival 2016, Colossal starts with Anne Hathaway’s Gloria stumbling home the morning after another heavy drinking session, her fed up and uptight boyfriend (Dan Stevens) indignantly waiting for her. Tired of her behaviour, he unceremoniously packs her bags and turfs her out, sending her away from New York and back towards the small town she grew up in. She moves back into her previously abandoned family home, and reacquaints herself with Oscar (Jason Sudeikis), an old friend from back in the day who never left town and now runs the bar he inherited from his parents.

So far, so un-Godzilla-esque. But the mumblecore-style antics get a shake up when Gloria wakes up hungover to discover (several hours late) a news story that’s shocked the globe: the previous night, a gigantic reptilian Kaiju appeared out of the blue in Seoul, causing mass destruction and loss of life. Naturally, the world is in turmoil, until everyone pretty much starts getting back on with their lives a few hours later. The bar’s patrons continue to be gripped from afar by the news of the monster’s occasional reappearances, but otherwise it’s business as usual, drinking beers and shooting the breeze. For the most part, the city-smashing is done in the background. It’s only when Gloria discovers she has a mysterious connection to the monster meaning she can control its movements that she starts to feel more personally invested in the carnage in Seoul.

More surprise shifts (that I won’t spoil here) follow, but that Colossal subverts pretty much all the tropes of the monster movie should come as no great surprise, given that it’s directed by Nacho Vigalondo, who previously turned genres upside down with Timecrimes and Extraterrestrial. As he did with time-travel and alien invasions, Vigalondo once again toys with expectations in a way that might frustrate purists but will prove a breath of fresh air for anyone seeking something a little more human from their monster movies.

The humanity levels get a serious boost from Hathaway and Sudeikis, who both give terrific performances that play against type. Hathaway – best known for driven, strong characters – is perfect as a woman who’s not defined by her drinking problem, and she doesn’t fall back on any of the cliches so often used to portray alcoholism on screen. Despite the film’s semi-comic tone and crazy premise, it’s actually a genuinely affecting performance, utterly believable next to the plot’s more fantastical elements. Sudeikis also gets to shine as he starts to step away from his loveable guy-next-door persona. As events unfold, the protagonists prove to be disarmingly complex, which will be a huge relief for anyone who found the characters in Godzilla and Pacific Rim flatter than cardboard cutouts.

While the concept has a surface simplicity (woman controls Kaiju with her mind) that sounds like kooky fun, there are surprising depths here for anyone looking for something a bit more substantial. A feminist reading can be applied to Gloria’s circumstances and the behaviour of those around her, while the film also explores ideas of nostalgia and ambition, and of the comfort and constraint of smalltown life. A film this idiosyncratic will never see box-office returns on the Godzilla scale, but Hathaway’s star power and Vigalondo’s obvious affection for the genre should see it roar a fair bit louder than your standard mumblecore movie when it eventually hits multiplexes.