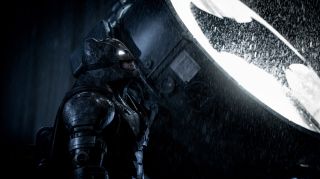 It wasn't that long ago that we found out Joe Manganiello would be playing Deathstroke in Ben Affleck's solo Batman film, and now we have a better idea of when we might see the two DC characters come to blows on the big screen.

During the 25th Annual Goldman Sachs Communacopia Conference, Warner Bros. CEO Jeff Bewkes had this to say when asked about the status of Batfleck's solo movie: "Ben announced a Batman movie [that] he’s going to direct, star, write for – I think it’s a year and a half out. So, the strategy worked".

It's unclear whether Bewkes was referring to the film's start of production or the cinematic release date, but it's more likely that it's the former. A release date 18 months from now would mean that we can expect Batman's solo outing in March 2018, but The Flash's solo film is already scheduled to be released earlier that month. Meanwhile, there's a March 2019 date that Warner Bros. have already earmarked for a DC movie, and Affleck's film could easily fill it if they begin filming in 18 months.

The current dates of DC's upcoming movies are not set in stone though, and the audience reaction to the Justice League may yet convince Warner Bros. to shift some release dates around. Watch this space...