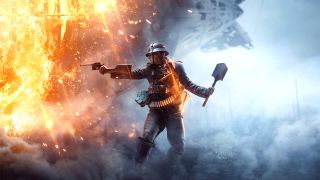 Battlefield 1 will get another map about two months after it comes out, EA and DICE have revealed, and you won't have to pay extra for it. The downloadable Giant's Shadow map will take players to the Battle of the Selle in December. It was one of the last major battles of World War 1, fought between a rapidly advancing British Empire and fatigued German forces. The Germans lost in real life, but they didn't have a train full of guns to use as a comeback mechanic.

Here's the description of the map from EA:

"Prepare to take part in the Battle of the Selle in the cold autumn of 1918. Here, the fighting moves out of the trenches and into open country where a massive crashed airship casts its shadow onto the battlefield. The British forces have broken through the Hindenburg line and are now in pursuit towards an important railway center. Fierce infantry and tank engagements ensue on the open ground and river banks alongside the Cateu-Wassigny railway where an armored train can still turn the tide."

Giant's Shadow brings the total confirmed map count for the game up to 6 - you've probably already seen The St. Quentin Scar and Sinai Desert maps in action from pre-release testing - though we'll likely hear about more soon. Folks who pick up the Battlefield 1 Season Pass will get guaranteed access to 16 more multiplayer maps, distributed across four themed expansions.