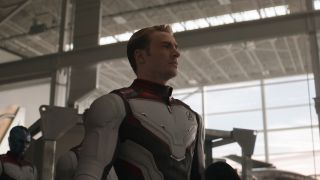 Using time travel as a plot device in any movie is risky business. Writers expose their stories to countless plot holes and paradoxes, ones that can confuse even the most avid Back to the Future fans. It's a risk the directors of Avengers: Endgame knew they wanted to take before introducing the concept to the Marvel Cinematic Universe, and a risk they executed excellently.

However, one question that many fans have been dying to ask concerns how Captain America managed to return to the main timeline at the conclusion of Endgame after returning all the Infinity Stones. Professor Hulk explains earlier in the movie that, by going back in time, each member of the Avengers created a separate timeline – hence why past events changing does not affect the main timeline (this works differently to Back to the Future).

Surely, then, Captain America going back in time to return the time stones would mean he's now on a different timeline, and he would therefore not have met Falcon and Bucky on that bench in the main timeline?

Luckily, the Russo Brothers have though about this and had an answer ready to go. "He would have had to have worn the quantum suit, using a Pym particle to make the jump [back to the main timeline]," they wrote in a Reddit Q&A. "He's not wearing the suit on the bench, because that is not the exact moment to which he returned."

While we won't be seeing Steve Rodgers in any upcoming movies, we will be seeing Sam Wilson's Captain America in the upcoming Marvel Phase 4 show Falcon and the Winter Soldier.