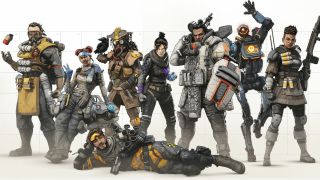 The notorious Peacekeeper is perhaps Apex Legends' most broken weapon, but a new patch nerfs it down a reasonable amount. The nerfs are part of a big patch that just went live on all platforms after an unforeseen delay, bringing major changes to Apex Legends' progression system.

"We’ve heard feedback loud and clear that the Peacekeeper is still feeling too powerful after latest changes. We are working to push out more tweaks to address it ASAP and will post details on timing and what those changes will be soon," read the patch notes.

Patch 3.2 also increased the level cap from 100 to 500 and give players the chance to earn a total of 199 free packs, up from just 45 before the patch. These substantial changes to the progression system should add a more tangible sense of reward for players who play Apex Legends consistently.

Additionally, friendly fire is now supported in the Firing Range, knockdown shields have been tweaked, and Wattson's Interception Pylon is "significantly more aggressive in the way it shoots down grenades." The patch also includes new gun charms and numerous quality-of-life improvements and bug fixes. Check out Respawn's complete patch notes for full breakdowns of each change.

The Peacekeeper may have been taken down a notch, but it's still a beast. Fight back with our best Apex Legends tips.