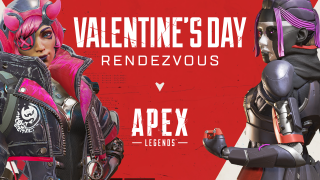 You can play the limited time game mode between 11 February to 18 February. Teaming up with that special someone or a random singleton will net you double XP (up to 20k per day) for the duration of the event.

In addition to duos, last year’s “Through the Heart” DMR weapon and “Love of the Game” cosmetic banner will also be returning, at a discounted price to boot. Even more new content will also be arriving in the form of “Love Struck” and “Love Finder” charms.

If the duos game mode isn’t really your thing, simply logging in during the event will reward you with a Valentines 2020 badge, simply for hooking up with Apex at this most romantic time of year.

Although Respawn hasn’t confirmed an exact time for the Valentine’s Day Rendezvous event, if previous updates are anything to go by, a 1PM EST / 6PM GMT launch is pretty likely.

It's been a busy time for Apex players recently. With the release of season 4, Apex Legends has received a slew of new content, the update to World’s Edge has torn Capitol City in half, and scattered new locations and points of interest across the map. Not long after the World’s Edge map received it’s update, rumours began emerging regarding the return of the Kings Canyon map.

Season 4 also saw a new champion, Revenant, enter the battlefield. They're a vengeful assassin who has an obsession with death. On top of that, a new weapon, the Sentinel, was introduced. It's a bolt-action sniper rifle with a reasonably quick rate of fire, and the ability to charge up shots for extra damage.

Are you playing Apex Legends Season 4? Check out our list of Best weapons in Apex Legends.