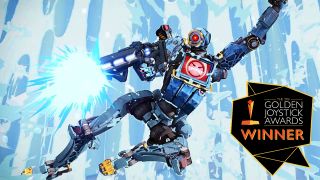 In 2019, Respawn Entertainment didn't just establish itself as a valid contender for the last player standing crown with Apex Legends, it's been voted by you as the Best Multiplayer Game at the Golden Joystick Awards 2019. "It was unexpected, but widely appreciated," says Charlie Hauser, Respawn's Brand Strategy Director.

This free-to-play game came out of nowhere in early February to become what GamesRadar Guides Writer, Ford James named "an immaculate battle royale that should only get better" in his five-star Apex Legends review. Even days before the now Best Multiplayer Game of 2019 was announced, few had any idea this vibrant, stylish shooter actually existed.

But it didn't take long for Apex Legends to swagger onto the battle royale stage and show why it was here to stay. Blending the battle royale game with hero shooters like Overwatch, the game boasts a packed roster of Apex Legends characters bursting with personality. Titanfall's powerful weapons and agile movement fit the genre beautifully, and Apex's ping and respawn systems were so innovative they were pinched by its rivals in a flash. "It's hard to imagine so much has happened in this amount of time," Hauser points out, referring to the ten month window between Apex Legends' launch and it winning the Golden Joystick award.

In a strong year for competitive and co-operative experiences that included Super Smash Bros. Ultimate and The Division 2, Apex Legends stood out. Respawn's success follows on from Bluehole's Best Multiplayer Game win at the Golden Joystick Awards 2017 and Fortnite's triumph as 2018's Best Competitive Game.

Here are all the nominees that fought it out for Best Multiplayer Game of 2019:

While it looks like there won't be an Apex Legends 2 anytime soon, we have recently seen a new map, World's Edge, a flurry of new characters, and new modes such as Duos. We might not have got Titanfall 3, but we did get the Best Multiplayer Game of 2019 instead.