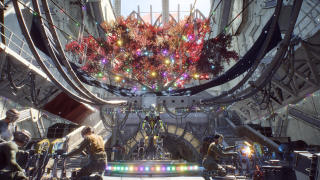 Ding dong merrily on high, the latest Anthem patch notes are here, and their extending the Icetide seasonal event until February. That means if you've been enjoying the layers of ice that have been blanketed across Bastion, they're going to be around for a little while longer. However it also means the Christmas lights are still hanging up around The Forge, so we'll let you come up with your own jokes about bad luck here.

The Icetide Season in Update 1.60 introduced seasonal themed updates, freeplay time trials, new challenges, and more goodies. In that original update, the patch notes said, "Shaper devices have brought localized ice storms into Bastion, bringing excitement with every glittering snowflake across the region. Ice is rare here, but when it arrives, people know that Icetide celebrations will soon follow. Holiday lights shine throughout Fort Tarsis, their bright colors sparkling on blankets of snow."

Update 1.62 has meant those bright colors are going to stay sparkling throughout February.

Here's a list of the bug fixes that the latest update brings:

Head here to see the 1.62 patch notes for yourself and, if you want to relive Christmas, we'll see you at The Forge.