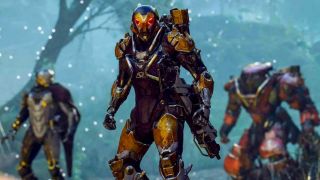 BioWare is now working on a "longer-term redesign" of Anthem, as general manager Casey Hudson confirmed in a new blog post reflecting on the game's troubled history and fundamental problems.

Hudson's post comes roughly three months after a Kotaku report on an update referred to as Anthem 2.0 and Anthem Next, which described a bottom-up transformation on the scale of No Man's Sky Next and Destiny: The Taken King. It sounds like that's exactly what BioWare has in mind.

"Over the last year, the team has worked hard to improve stability, performance and general quality of life while delivering three seasons of new content and features," Hudson says. "We have also heard your feedback that Anthem needs a more satisfying loot experience, better long-term progression and a more fulfilling end game. So we recognize that there’s still more fundamental work to be done to bring out the full potential of the experience, and it will require a more substantial reinvention than an update or expansion."

This leads to what may be the most damning line in Hudson's post: "And to do that properly we’ll be doing something we’d like to have done more of the first time around – giving a focused team the time to test and iterate, focusing on gameplay first."

A previous report suggested that Anthem came together in just over a year after spending several years in development hell, and while BioWare largely dodged the circumstances described in the report, Hudson's comment suggests that Anthem's final, prolonged sprint was far from ideal.

Hudson says BioWare will be working on this long-term update "over the coming months," but doesn't nail down when players can expect it to come to the game. And while Anthem will remain online for the foreseeable future, seasonal content will be pared back to free up resources within the studio. Events and store refreshes will continue, and past seasonal and Cataclysm content will be revisited, but it sounds like new content will be nearly non-existent.

"Creating new worlds is central to our studio mission, but it’s not easy," Hudson closes. "Sometimes we get it right, sometimes we miss. What keeps us going is the support from players like you. Your feedback gives us guidance on how we can improve, and your passion inspires us with the courage to create. I look forward to working together with your involvement and feedback towards the best possible future for Anthem."