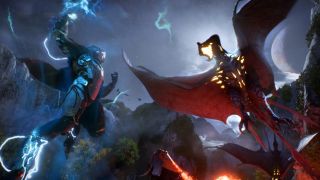 A new report from Kotaku supports what many people have suspected for some time: throughout Anthem's development, BioWare was reportedly fraught with identity crises, technical difficulties, and managerial conflicts.

The article, which features input from over a dozen current and former designers who worked on or near Anthem, says these issues created a confusing and incredibly stressful environment. It was in this type of environment where the bulk of Anthem was reportedly stitched together in the final 12 to 16 months of its massive seven-year development cycle. This rush to the finish is said to have followed years of redos and restructures which ultimately couldn't salvage a misguided project.

The issues described are vast and numerous. Curiously, many of them echo the problems Anthem players have highlighted since the game's release. Many felt Anthem failed to learn from the mistakes of previous looter shooters like Destiny and The Division, for example. So I suppose it makes sense that, according to one developer, comparing Anthem to Destiny was considered taboo in the office, with Diablo 3 being the team's preferred reference.

"We were told quite definitively, 'This isn’t Destiny,' one developer told Kotaku. "But it kind of is. What you’re describing is beginning to go into that realm. They didn’t want to make those correlations, but at the same time, when you’re talking about fire teams, and going off and doing raids together, about gun combat, spells, things like that, well there’s a lot of elements there that correlate, that cross over."

A lack of direction

Several developers said Anthem's development team lacked a clear vision of what the game would be for the first few years of its life, and many said management could scarcely agree on ideas.

One turning point, one developer said, was Anthem's E3 2017 demo. It was reportedly based on a build which was put together for former EA executive Patrick Söderlund, who was apparently unimpressed with a previous internal showing. One developer said it was only during the making of this demo build that BioWare finally committed to adding flying to the game. This seems strange now since flying is arguably Anthem's best feature, but according to the report, flight was added to and removed from the game several times due to design conflicts.

It is concerning that, even at this advanced stage, Anthem's fundamental ideas were apparently still up in the air. However, several developers said preparing a demo together at Söderlund's request helped give the Anthem team a clearer vision of what they were making. (Incidentally, the name of the game was also reportedly changed right before E3 2017 - from Beyond to Anthem.)

"After E3, that’s when it really felt like, ‘Okay, this is the game we’re making,'" one developer said. "But it still felt like it took a while to get the entire team up to speed. It was also kind of tricky because there were still a lot of question marks. The demo was not actually built properly - a lot of it was fake, like most E3 demos. There was a lot of stuff that was like, ‘Oh are we actually doing this? Do we have the tech for that, do we have the tools for that? To what end can you fly? How big should the world be?'"

Technical constraints proved to be another constant battle. Anthem was made using the Frostbite engine - which was created by Battlefield studio DICE - which many EA-owned studios use to make games. The trouble is, Frostbite wasn't designed with an online looter shooter in mind, so BioWare not only had to build a lot of the game from scratch, they also had to fight Frostbite's kit every step of the way.

"Part of the trouble was you could do enough in the engine to hack it to show what was possible, but then to get the investment behind it to get it actually done took a lot longer, and in some cases you’d run into a brick wall," one developer said. "Then you’d realize, ‘Oh my god, we can do this only if we reinvent the wheel, which is going to take too long.’ It was sometimes difficult to know when to cut and run."

Another developer described Frostbite as being "full of razor blades," which lines up with previous statements about Frostbite. Suffice it to say, it's not a popular engine at many studios.

These issues piled up for years, the report says, so as Anthem's release drew ever closer, BioWare brought in more and more people in an effort to get the game off the ground. Studios started collaborating more heavily, but not without issues: the relationship between BioWare Edmonton and BioWare Austin was reportedly strained, in no small part due to creative disagreements.

"We’d tell them, ‘This is not going to work. Look, these [story] things you’re doing, it’s gonna split up the player experience,’” one BioWare Austin developer said. "We’d already been through all of it with The Old Republic. We knew what it was like when players felt like they were getting rushed through story missions, because other players were on their headsets going, ‘C’mon c’mon, let’s go.’ So we knew all these things, and we’d bring it up repeatedly, and we were ignored."

Other developers reported similar problems throughout Anthem's development: designers would raise concerns about specific features or ideas, but they would be ignored due to creative differences or immovable deadlines. One developer said "reading the reviews is like reading a laundry list of concerns that developers brought up with senior leadership."

Many developers said that it was only in late 2017, following the arrival of executive producer Mark Darrah that Anthem finally started to make real headway. Of course, we know from experience that BioWare could only fix so many problems before launch. Post-launch updates have certainly helped, but Anthem is still in a poor state, and its future remains uncertain.

Nevertheless, BioWare says it's committed to improving the game. In a statement released today in direct response to Kotaku's report, the studio said, "Our full focus is on our players and continuing to make Anthem everything it can be for our community. Thank you to our fans for your support - we do what we do for you."

This statement also addresses the studio's decision not to comment directly in the report: "We chose not to comment or participate in this story because we felt there was an unfair focus on specific team members and leaders, who did their absolute best to bring this totally new idea to fans. We didn’t want to be part of something that was attempting to bring them down as individuals. We respect them all, and we built this game as a team … We don’t see the value in tearing down one another, or one another’s work. We don’t believe articles that do that are making our industry and craft better."

At the very least, BioWare's response comes across as a bit tone-deaf given the contents of the report. For one, its stance on "tearing down one another" conflicts with its employees' obvious eagerness to share and discuss these issues. Kotaku's report serves to highlight some of the concerns and conditions that contributed to Anthem's rocky development and launch, and again, it features input from many developers across multiple disciplines and BioWare studios. I don't think it lingers excessively on any particular person, and it's certainly not a character attack. (Notably, BioWare's response doesn't deny the contents of the article, either.)

Anthem launched in rough shape, and the problems discussed in this report fit with the issues that cropped up before and after its release. Other looter shooters have evolved in the past, and I would love to see Anthem turn into the game BioWare always hoped it would be, but whether it can or will remains to be seen.