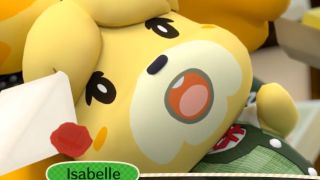 Nintendo Directs are always a treat, with their rapid-fire trailers and reveals that inevitably go viral, and today's presentation was no different. The big news is that Animal Crossing on Nintendo Switch is coming sometime in 2019, though we didn't get much info on the game beyond that confirmation. Everyone's favorite assistant Isabelle is joining the Super Smash Bros. Ultimate roster, and Luigi's Mansion 3 is currently in development for Switch as well. But in my mind, one little fact cast a dark, Soylent Green-esque shadow over everything else in the Direct: Toadette can become Peachette.

For some context, this is a feature of New Super Mario Bros. U Deluxe, a port of the Wii U platformer coming to Switch. The original's playable Blue Toad has been benched in favor of Toadette and Nabbit - and whenever Toadette grabs a Super Crown, she transforms into Peachette, a simulacrum of the Mushroom Kingdom's princess who can double-jump, glide, and bounce back from pitfalls. The lore and evolutionary ramifications are staggering. Does this mean all Toads can potentially become miniature Marios? Has Peach been an ascended Toadette all this time? Twitter users immediately sprang to action with their own responses:

Toadette's transformation into Peachette upon collecting a crown in New Super Mario Bros. U Deluxe may be a reference to Yoshi's ability to transform into Mario, Luigi and Wario by picking up their hats in Super Mario 64 DS. pic.twitter.com/6XmpvIbptxSeptember 13, 2018

when toadette gets a super mushroom she should turn into the toad lady from the anime pic.twitter.com/fmyKVg9hg0September 13, 2018

If you've successfully wrapped your head around the concept of Peachette, here's an easy-to-peruse list of all the other announcements from the 9/13 Nintendo Direct. It's all in chronological order, and should save you quite a bit of time if you're unable or unwilling to watch the entire 40-minute Direct yourself.