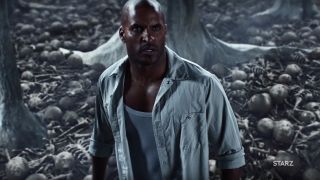 The upcoming TV adaptation of Neil Gaiman’s 2001 novel American Gods is hitting the small screen soon, and today Starz unveiled a bloody, terrific new trailer that sets up an all-out war between old gods and new ones. Check it out:

That looks pretty damn incredible, and it looks like the internet agrees. Twitter users went nuts when they saw it:

i've read it dozens of times & never had clear visions of the characters in @AmericanGodsSTZ but every choice for the show seems spot onMarch 15, 2017

I am so damn excited for this series. I'm obsessed with the book and this will be an amazing adaptation #AmericanGods https://t.co/g3orXP4HZYMarch 15, 2017

Started watching the new American Gods trailer at work but had to stop because I started breathing heavily.March 15, 2017

The trailer also received the seal of approval from one very important person:

I actually read Gaiman’s novel last year after hearing people rave about it for the past decade, but I was ultimately disappointed because I thought the pacing was painfully slow. Thankfully, it doesn’t look like that’s going to be the case with the TV version, because this trailer is stuffed with so much jaw-dropping imagery that it makes me think this story will work far better as a show than it does on the page.