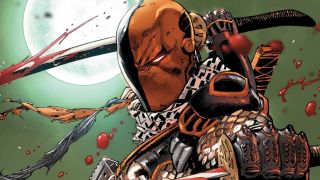 Gareth Evans, director of The Raid movies (note: not Gareth Edwards, who directed Godzilla and Star Wars: Rogue One) may soon helm a Deathstroke solo film set in the DCEU (what DC calls its film universe). The Wrap reports that Evans is in talks with Warner Bros. about writing and directing a movie focusing on the popular villain / anti-hero.

"But wait," you say, "Wasn't Deathstroke supposed to be the villain in The Batman, DC's standalone Bat-fleck movie?" After all, when Collider spoke to Affleck about the villain, the star said, "He’s a great villain because... I just had an instinctive feeling that he would match up with [Batman] well. You know, I’m a big admirer of that character as well, especially in the New 52 the way that they did Deathstroke, and I thought that it could work."

And what about that tweet showing Deathstroke walking ominously toward the camera?

Well, all of that was the case, back when Ben Affleck was sitting in the director's chair. Now he's been replaced by Matt Reeves, who tossed the Deathstroke-centered script, and we really have no idea what the plot of that film will be (if indeed it ever comes to fruition). Deathstroke may show up, but I wouldn't count on it. Regardless of what happens with The Batman though, actor Joe Manganiello will retain the role in Evans' spin-off movie.

Evans, who had previously been courted by WB to direct Justice League Dark and turned that film down, reportedly impressed studio execs with a Deathstroke pitch. He also received high praise for the action scenes in The Raid, which a Deathstroke movie would certainly need a lot of. Put those two things together and voila! - another movie added to the slate. And if you're still not sold on Evans' skill, keep an eye out for his upcoming films, Apostle and Blister.