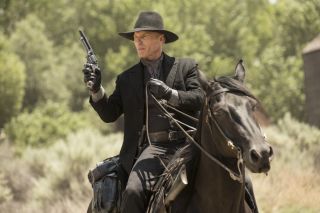 Westworld episode 2 is now available to stream. HBO announced the early release of the episode last night via Twitter, in a very Westworld-y way: through a glitch in the Narrative department.

Why the early drop? Probably because of the next US Presidential debate that's happening Sunday evening. Westworld's premiere scored HBO 3.3 million viewers so it's likely wanting to ensure a similar amount tune in for the second episode.

Speaking of, yesterday we caught a glimpse at this next ep through a bunch of new pictures released by HBO. What did they reveal? More bustling action on the streets of Sweetwater and the Man in Black sauntering out in the dusty hills. Oh, and distinctly worried looks on the faces of two park employees.

Yessir, those reverie tweaks to the Hosts appear to be causing more problems that are going to have more characters hauled in for tune-ups. Maeve, the brothel madam, has a time out with behavior engineer Elsie to avoid a total recall (ahem).

Here's the full synopsis from the network: