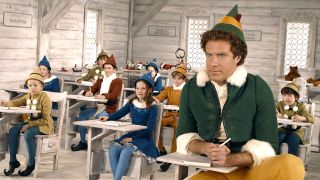 Son of a nutcracker! It’s Christmas already and that means a good many of you will be looking to bust out Buddy the Elf for the cotton-headed ninny muggins that make up your family and friends. Don’t you worry, fellow Elf-likers, we’ve got the article just for you. If you’ve never seen Buddy the Elf in action and want to find out what all the fuss is about, let me speak in modern terms: he’s basically Forky from Toy Story 4 for anyone over the age of 15.

With the streaming wars raging on it’s getting more and more difficult to figure out which service holds the license to your favorite Christmas films, so in this short guide we’re going to run through how you can watch Elf with ease whether you’re based in the UK, US or Canada, with a word on how to join in on the fun if you’re outside of those regions by using a VPN. Let’s get into it, my sweet arctic puffins.

And if you're looking to open up your viewing over Christmas, here are the best VPNs for Netflix you can subscribe to.

How to watch Elf (US)

Cracking out the candy canes and watching Elf in the US is as simple as it should be this year. There’s no budging on price though, it’s a cool $3.99 on Amazon, iTunes and the Microsoft Store. Fill your stockings, and impress your friends and family by noting that Elf was directed by Jon Favreau, who, as well as being Tony Stark’s right-hand man in the MCU, is now in charge of The Mandalorian! Quite the glow-up. If they’re getting on a bit they might best know him from Friends...

How to watch Elf (UK)

As well as being broadcast on ITV on Christmas Eve at 17:15 (doesn’t that just make you feel all fuzzy?) Elf is widely available to those of us with an Amazon Prime subscription, and you can stream it as much as you like via Prime Video. If you wish to pay for it and don’t fancy grabbing a trial or setting a schedule, you can rent Elf for £3.49 on Amazon or iTunes.

How to watch Elf (Canada)

In Canada you can catch Elf on Cineplex or head over to the iTunes store and pay $4.99 to rent it in HD. Beyond that, you could check out the Microsoft store and pay the same $4.99 for the privilege. Depending on the ecosystem you frequent, it’s your call! Make sure you keep an eye out for Peter Dinklage (Tyrion Lannister!)

How to watch Elf online in other regions

If you’re in Australia, hit up Netflix for your Elf fix and consume to your heart’s content, you lucky lot.

How to watch Elf online via VPN

You might be looking at some of the prices above and wanting a cheaper deal on your region’s version of Elf. There’s an easy way to get around that region roadblock. Watching via VPN has never been easier: installing the software allows you to trick your ISP into thinking it’s in another country, opening up that country’s library of movies (and most importantly, prices) to you.

So, if something is cheaper on Apple in the UK, for example, and you’re on the East Coast of America, simply fire up the VPN, set your server location to London, Manchester, or any number of UK cities and away you go. It really is that simple.

If you’re mindful of security and want a secure, long-term option, Nord VPN is going to be the best VPN for you. At only $3 a month if you sign up for 3 years, the service also boasts 2048-bit encryption, oodles of servers to choose from and, best of all, a 30-day money back guarantee if you’re not happy with the service.

If you want something a little cheaper but just as reliable, Vypr VPN is worth a shot. It’s only $5 a month if you sign up for 12 months and, whether you’re streaming or downloading, it’s going to be equally fast for you. Even better, you get a three-day trial so you can dip your toe in the VPN water before committing outright.

For a great all-rounder, try Express VPN. It’s available to use via PC, Mac, iOS, and Android and comes at a decent price. It's one of the most reliable VPNs, it doesn’t track any of your usage and its ease-of-use makes it the best option for VPN newbies.