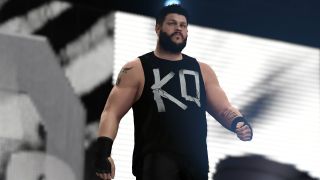 WWE has a new Universal Champion in the shape of Canadian brawler Kevin Owens – but his first title defence may be against an unexpected opponent. Namely, Toad from Mario Brothers.

Owens overcame Roman Reigns, Seth Rollins and Big Cass on last night’s Raw to win the belt vacated when Irishman Finn Balor suffered a torn labrum, mere days after we caught up with him in New York to talk videogames and prospective fantasy foes. And it was here that he confessed his distaste for the plumber’s mushroom-headed mate.

“That Toad guy from Super Mario Brothers,” he replied when I enquired which videogame character he’d most like to go up against, Street Fighter x Tekken style. “I’d love to kick that guy as far as I could. He just looks so annoying.”

“I played SEGA a lot [in my teens], but then discovered wrestling and kinds of dropped everything else,” Owens said of his gaming past. “I played Mortal Kombat a lot, and Sonic The Hedgehog would be the one I used to play the most. Any of the Genesis variations were classics.”

The Mortal Kombat link makes my next question easy. What would be Owens’ videogame finisher?

“A pop-up powerbomb… maybe through the floor,” he says. “Or on a jagged rock. Wherever.”

GR+ caught up with WWE 2K17 ahead of Summerslam, and you’d be mad to miss the 11 things we learned going hands on with the new game.