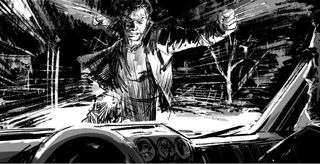 The final Wolverine movie, Logan, is fast becoming the most teasing super movie in Hollywood. It's mainly been Instagram posts of severed arms and villains but now we have some storyboards showing Wolverine attacking a car.

The images were tweeted by director James Mangold:

Okay, not a lot to go on initially but we did have this image yesterday of Boyd Holbrook, rumoured to be playing cyborg villain David Pierce. And, oh look, he's in a car.

Okay, lots of people are in cars quite often but Logan attacking the villain is a pretty likely event in the movie. Other images have also shown a truck at a gas station:

And this, teasing the mutant apocalypse kind of vibe from the book Old man Logan that is said to be inspiring the film. In that story most heroes have been wiped out.

It's the last image that's got a lot of people talking, though:

That could be... interesting.