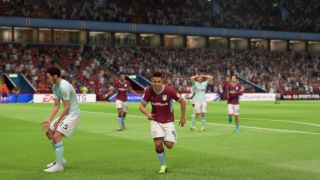 Reports of Aston Villa tabling a £32 million bid for one of La Liga’s best strikers triggered deadline day excitement in the West Midlands and peak eyebrow-raising everywhere else – but what does the Wissam Ben Yedder FIFA 19 stats rundown say about his prospects away from Sevilla?

The Frenchman has been linked with Manchester United and Monaco in addition to the unlikely Villa collection, and little wonder: there are an astonishing seven Wissam Ben Yedder FIFA 19 cards available, most of them reflecting his excellent 2018-19 performances. He started the season with an 81-rated gold card, which was upgraded to an 82 gold in January. He also has three TOTW items (84, 86, 87), one UEL Live item (87) and a TOTS card (93). All things considered, probably an upgrade on Scott Hogan.

The January upgrade base gold is the one we’ll inspect for this feature, and it’s been a cult favourite among season-long Ultimate Team players despite its stingy 82 overall rating. Acceleration of 87 enables Ben Yedder to burst past lorry-slow centre backs, before 84 composure and 85 finishing more often than not sees keepers flailing at thin air. He’s not quite as adept aerially, with scores of 74 heading accuracy and 77 volleys, but a one-in-two goalscoring return is easily achieved by most players. How Villa would love that.

Ben Yedder can lay on chances as well as convert them. 78 vision, 76 passing and 74 crossing mean that even if you prevent him shooting he can play a fellow ST, or late-arriving CAM, in on goal. Combine those abilities with an 89 positioning rating and you have a forward who’s constantly in the right place at the right time.

One slight concern for Villa and other, more realistic suitors will be the suggestion that, at 28, Ben Yedder’s career hopes are trending downwards. His FIFA 19 career mode potential is 78 – identical to his current overall rating.

An unquestionable fan favourite in FIFA, the Wissam Ben Yedder Football Manager 2019 stats profile isn’t quite so dominant – though it’s a long way from mediocre. Standout numbers here – don’t forget, FM rates out of 20 rather than 100 – include finishing (17), first touch (16), determination (15) and flair (15).

14 pace and 15 acceleration are in this instance helpful if unspectacular, although Villa should note that hopeful balls into the box are unlikely to bring joy if FM is anything to go by. Ben Yedder scores 11 for heading, 11 for strength, and - don’t look now! - 8 for positioning.

FIFA 19 is out now. Already looking ahead to its successor, and mapping out your home ground plans for next year’s Ultimate Team? Then you need our FIFA 20 stadiums guide.